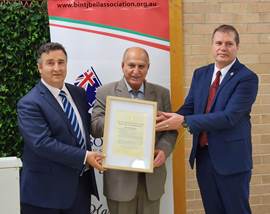 On Monday, 14th Nov 2022, the Hon. Shaoquett Moselmane MLC hosted a appreciation reception in the honour of famous Arab Journalist Mr. Akram El Moughawich who is serving Multicultural communities in Sydney since 405 years. The event was held at the Coronation Hall, Arncliffe Sydney and attended by leading personalities of the Media. 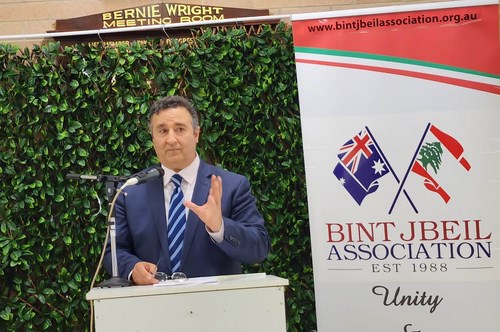 Acknowledge the traditional owners of the land,

Acknowledge special guests that have joined us here tonight but in particular the media representatives, Joe Khoury from the Future Newspaper, Madouh Sukkarieh, the World Observer online and Syed Zafar Hussain, Editor in Chief from Sada-e-Watan Sydney.

Acknowledge the role of ethnic media in Australia.

We all know of the significance ethnic media plays in Multicultural societies such as Australia.

Politicians particularly during election time often call on the ethnic media to convey their messages and policy ideas to multicultural communities.

I accept that this affliction is not unique to media outlets, in my view, however, the State Government should find the means to support the service the ethnic community media provide.

Ethnic community media play a vital role in the everyday lives of millions of Australians. They help the newly settled to understand what is going on around them and help them make informed contributions to community discussions and decisions.

They are at the heart of everyday living of migrant communities that produce and transform ethnic identity, culture and perceptions, and help them fit in and coexist and understand culture, behaviour, etiquette, ethics and values of others they live with and around and, by extension, identify themselves in the overall society in which they live.

They can become mobilising agents for ethnic communities, and they can be indicators or barometers of social change.

Ethnic media have the capacity to raise awareness about issues not addressed in mainstream media. Ethnic media can provide members of the broader community with insights into changes or developments taking place around them and internationally.

I understand, respect and value ethnic community media journalists and producers and all who are involved in producing their radio programs, their press reports and their online services. I know they work hard and are committed to their jobs. I commend them for their perseverance in making their product a success.

That’s why I had established the Multicultural and Indigenous Media Awards to recognise the work of ethnic community journalists and to reward them accordingly.

Members will be aware that I have been recognising ethnic media journalists and owners in motions I have put before the House.

It is time that we recognised them for keeping the community informed about national and international affairs.

Today we are starting to see community language media diversifying, producing in ethnic and English languages in print, on radio and on websites.

Significantly, Government is recognising the true value of ethnic media and encouraged their success through supportive measures and creation of new services such as the recently launched SBS Arabic TV.

Ethnic media relies on the good will and hard work and commitment of the people involved such as the likes of Akram Elmougawish.

Akram as you all know is of Australian Syrian heritage.

He has made a respected contribution to Multicultural media in Australia. This is why we are here today to honour his work and his commitment to covering community news.

Akram Elmougawish obtained his certificate from the Institute of Arab Literature and Media in 1973 and immigrated to Sydney Australia in December that year.

In 1978/79 he commenced writing in Australian Arab media newspapers until, in 2010, when he was appointed as Deputy Editor-in-Chief of Al-Nahar newspapers, later Al-Nujoum magazine and Al-Anwar newspapers and then the Herald Arabic newspaper. 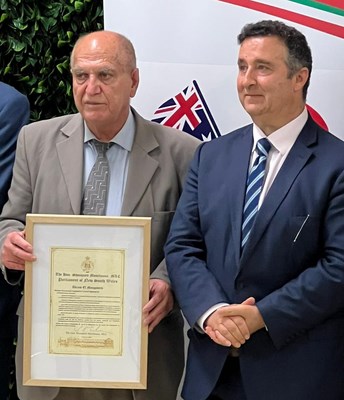 Over the years Akram wrote hundreds of articles in politics, social issues and community news.

Akram Elmougawish has received a number of certificates of appreciation from many charities charitable work as well as receiving awards from the Syrian, Lebanese and Palestinian ambassadors for his contribution to charities and Australian Arab media.

For this I was honoured to move a motion in the legislative council to congratulate Mr Akram Elmougawish on his career and for his contribution to Multicultural media in Australia.

I would now like to call on Akram to receive a certificate of the framed motion.
Alf Mabrouk. 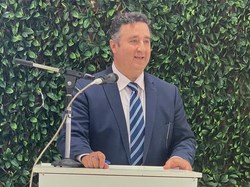 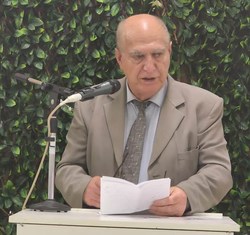 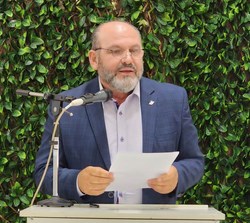 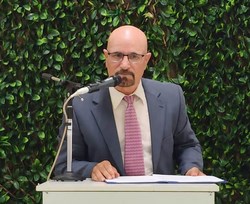 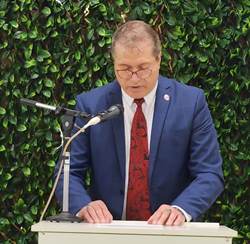 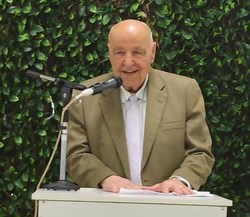 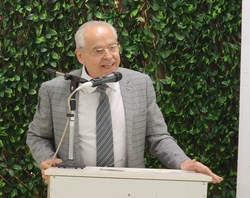 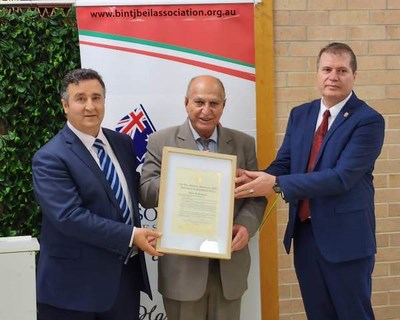 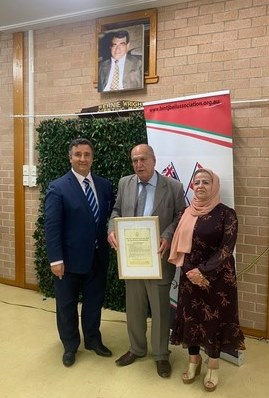 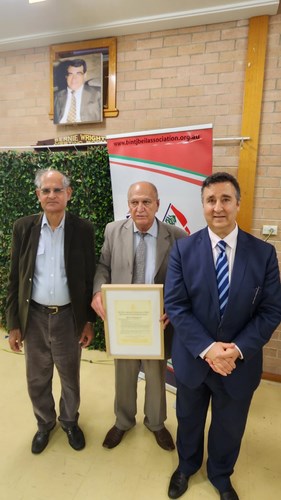 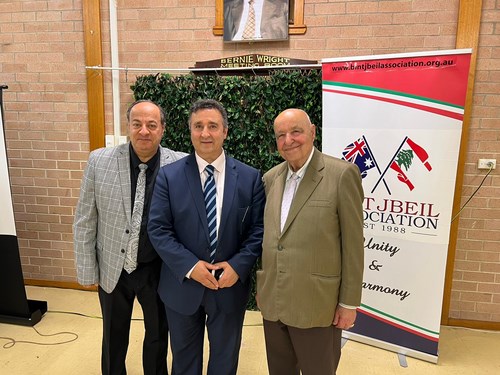 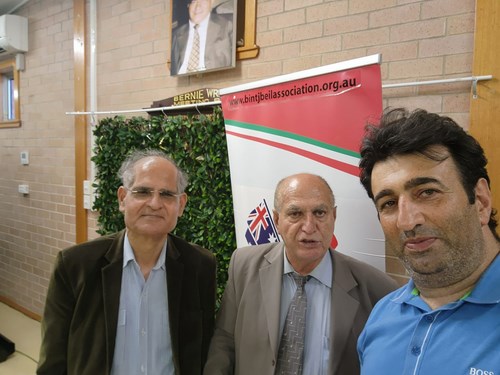 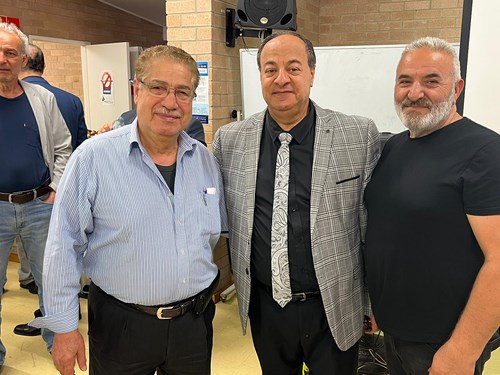 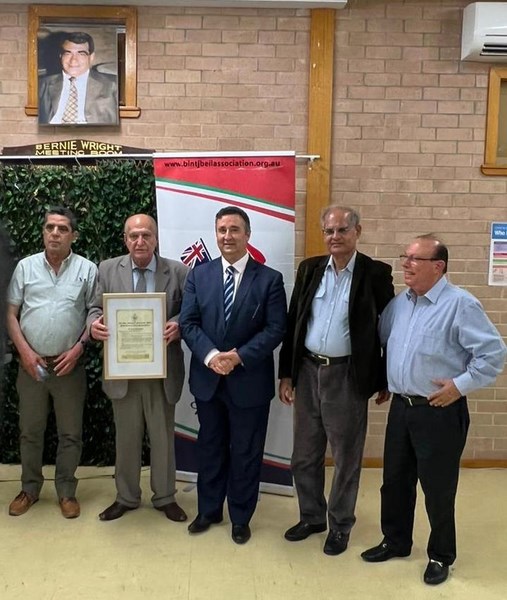 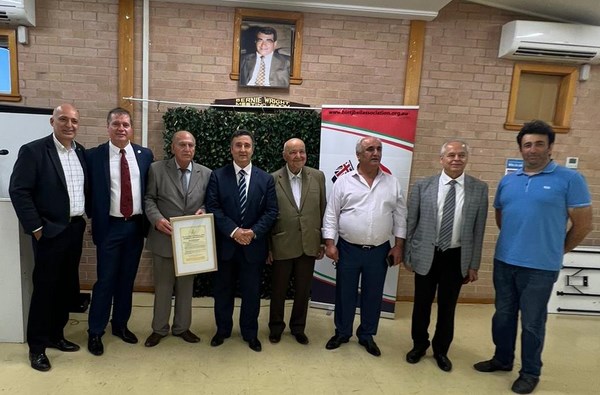 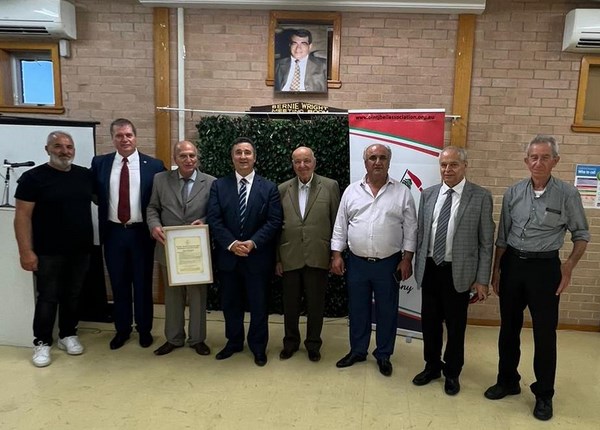 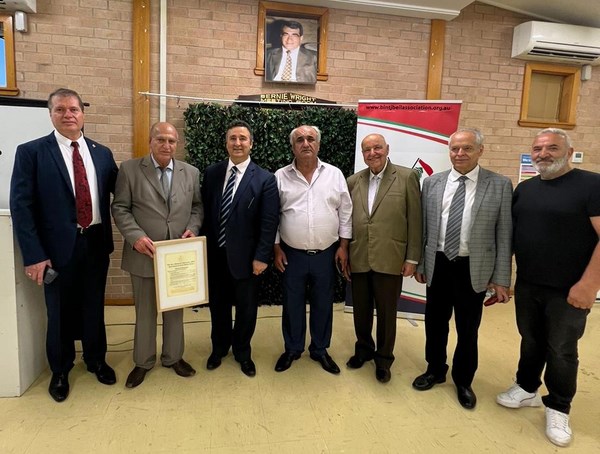 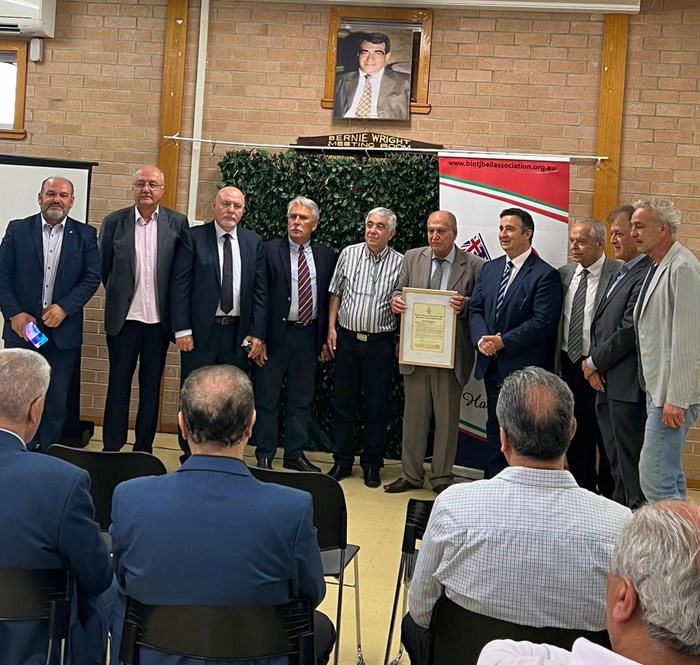 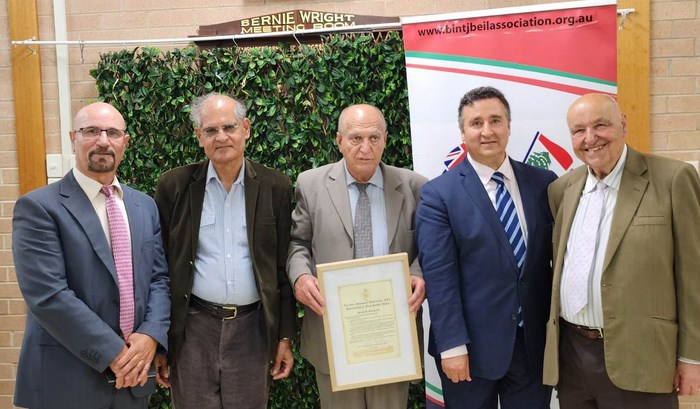 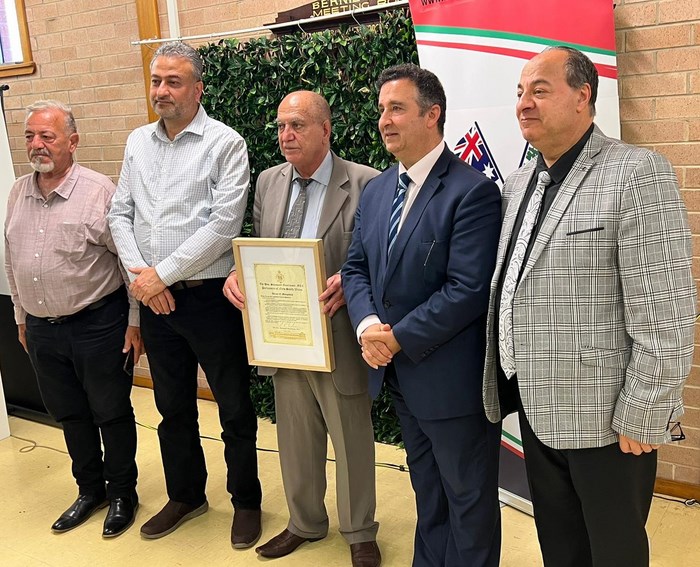 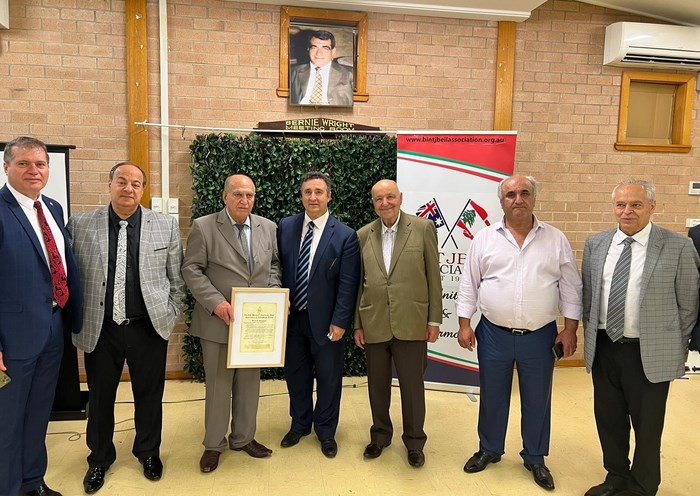 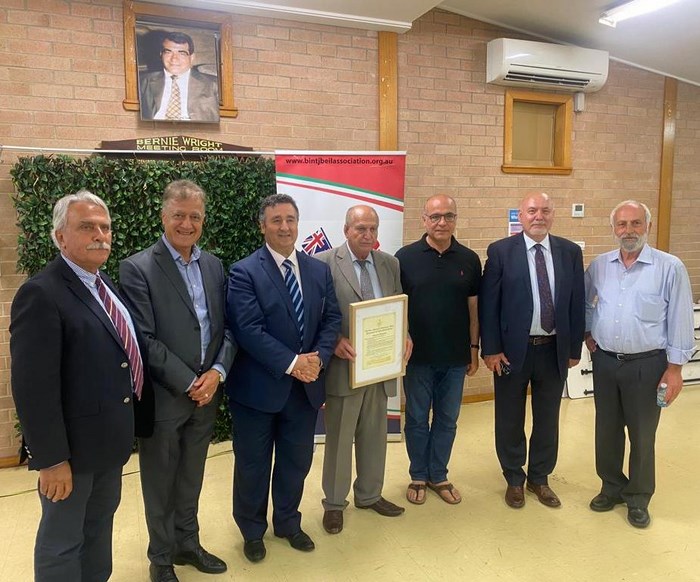 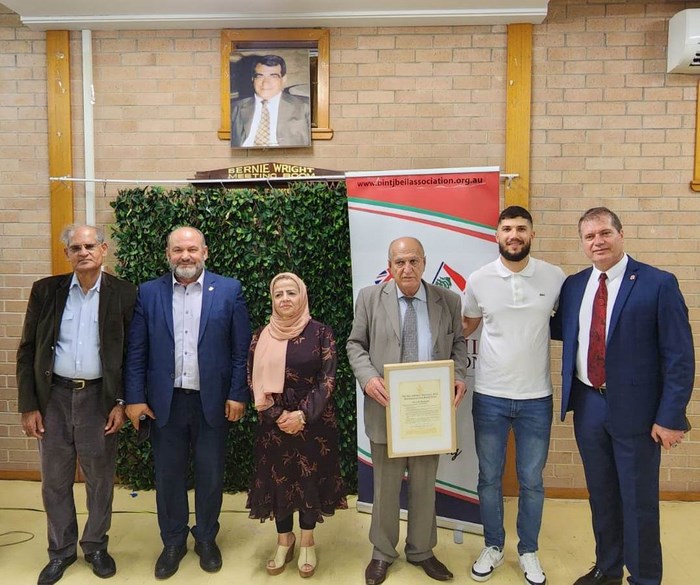 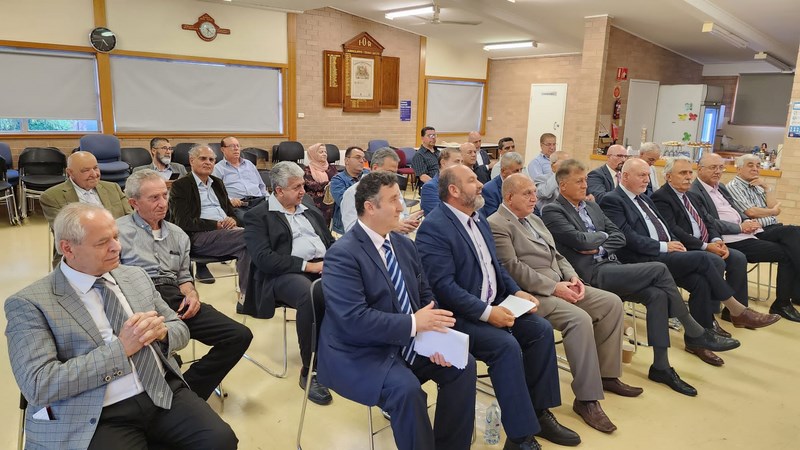 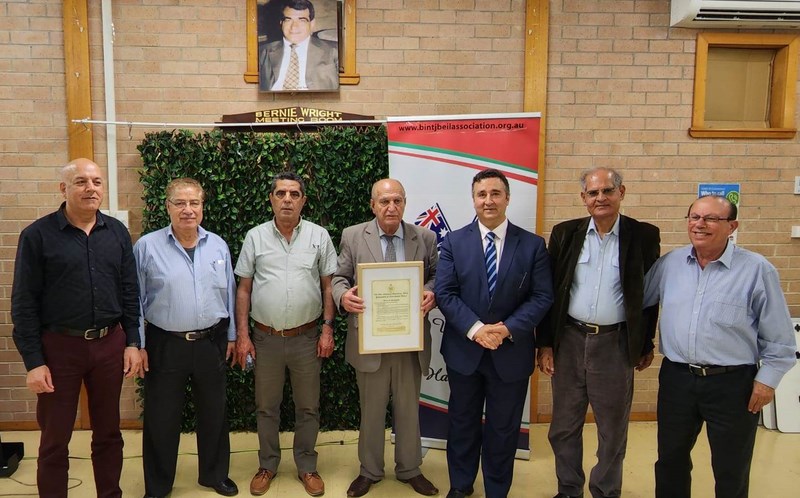 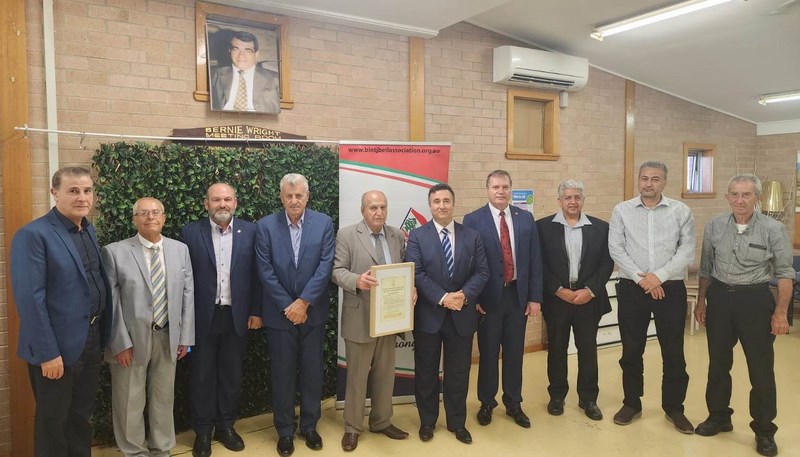