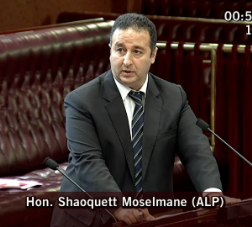 The Hon. Shaoquett Moselmane MLC, Speaks in the Parliament regarding COVID -19 and NSW government’s unfair treatment of Western Sydney

My brief contribution on the NSW government’s COVID -19 harshest treatment of Western Sydney. The people of South West and West of Sydney, had the hardest lockdown throughout Australia at any time during the pandemic.

The NSW Government imposition of curfews on Western Sydney LGA's they called areas of concern was another blow to communities brought down to their knees pleading for assistance as they struggled to pay their mortgage, pay rent and bills or put food on the table.

People in Western Sydney began to wonder why the ill treatment. Why were people in Eastern Sydney in their thousands flocking to the beaches with little regard for masks or social distancing free to enjoy the fresh air. This, while South West and Western Sydney, where there are no beaches, few pools, relatively few parks were the red danger zones,?

Why the difference in policy when the Delta disaster originated in Bondi and spread from Bondi, the Sydney’s East, Yet Bondi has never been an LGA of concern.

Why did Health Minister Brad Hazzard have no issue with beachgoer’s masklessness, not interested in fining them or discovering their vaccination status, while the people of Western Sydney suffer the sweltering heat, have their pools and Aquatic Centre closed. People rightly asked Why?

The lack of any curfew in the East intensified perceived partiality and that sense of injustice.

The Premier herself admitted the use of curfews did not have much of an impact on stopping the spread of COVID. So Why did the government persist with it?

What the NSW government needed to provide was extra financial support for individuals and businesses as many suffered losses in trade of up to 70 per cent.

This is why the opposition decided held a virtual roundtable with West and South West Sydney business and community leaders to discuss and hear first hand from those that mattered, what is needed to deliver meaningful economic recovery that will help people and business get back on their feet once lockdown and restrictions are lifted.

Well, we knew this and as our shadow Minister for Western Sydney, Greg Warren MP said: “The people of Western Sydney won’t forget how this Government treated them during this lockdown”.