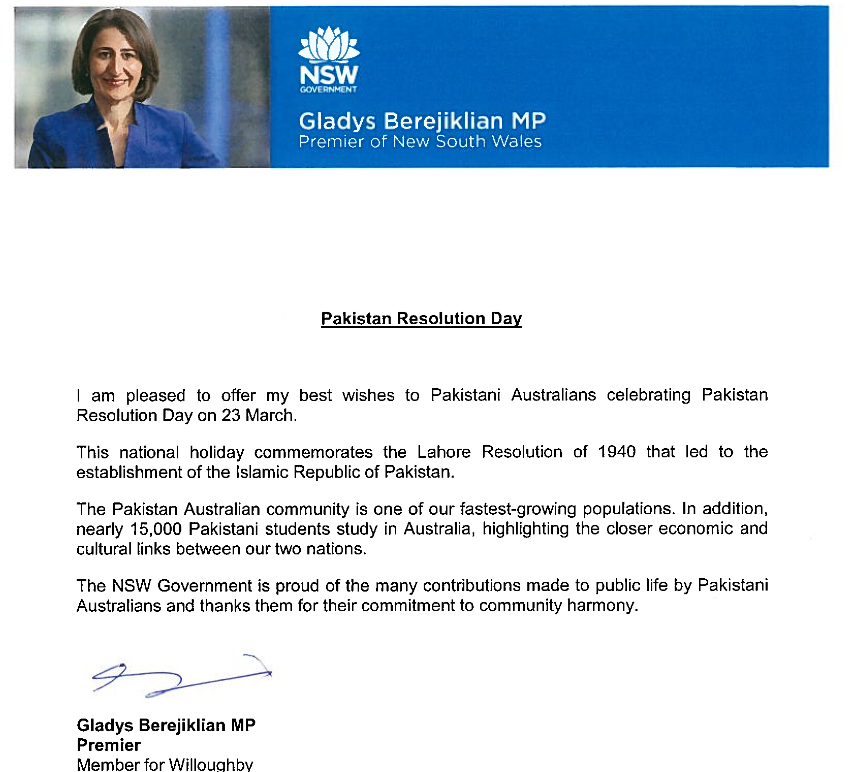 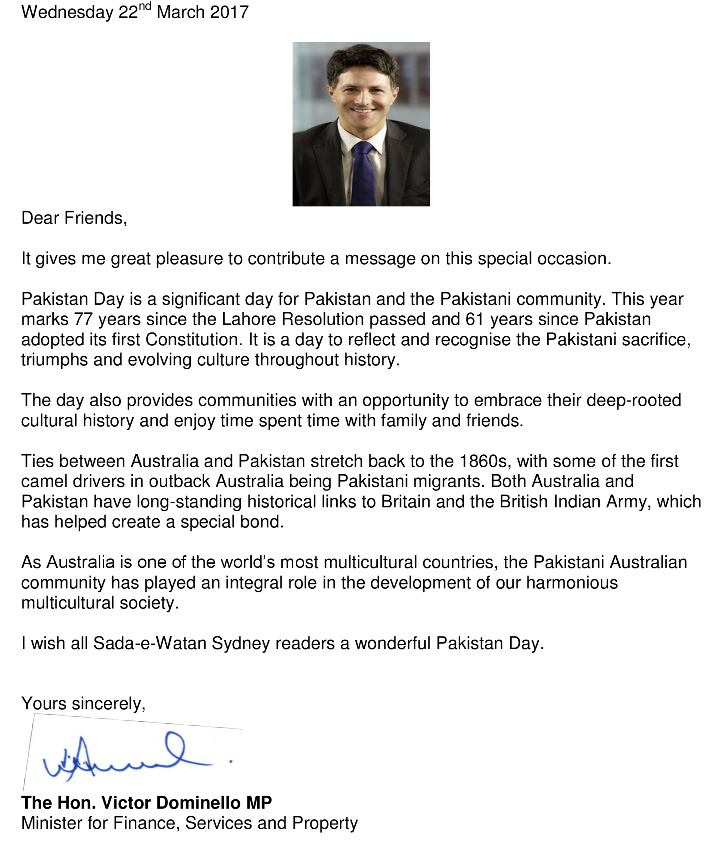 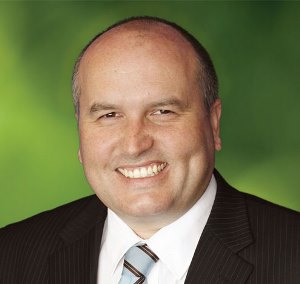 For 77 years, the people of Pakistan have celebrated their right to self-determination as a nation state, free to chart its’ own course in the world. In more recent times, the challenges faced by Pakistan are not unique to the Asian sub-continent, but are confronted in the spirit of friendship and cooperation with Australia as we both seek a free, safe and prosperous world.

I wish you, and your home nation of Pakistan, a very safe and happy Pakistan Day. 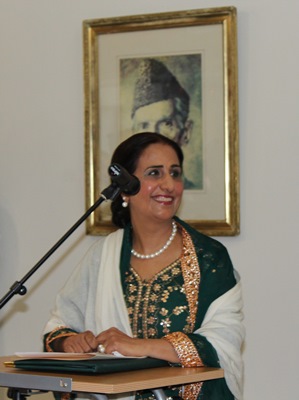 I would like to convey my heartiest felicitations on the National Day of our beloved country, to the members of Pakistani community in Australia, Papua New Guinea, Fiji, Vanuatu and Solomon Island.

Our diaspora that lives abroad, has great love for Pakistan and their hearts beat for it. For you this green and white flag is equally sacred and a symbol of pride.

Today, we celebrate the Pakistan Day with a sense of deep gratitude and humility, before Allah (SWT) for His countless blessings and bounties. We have a democratically elected Government in Pakistan which through implementation of Vision 2025 will improve the lives of the people and take the country to new heights of development and prosperity.

The Government is resolutely determined to vigorously follow effective, result oriented, people friendly policies to place the country firmly on the path of safety, security, peace, progress and prosperity, in the long-term. We, the Pakistanis whether at home or abroad need to continue to demonstrate fortitude and resilience in the face of challenges and support these efforts.

Seventy years ago, when Pakistan for the first time figured on the world map, that generation demonstrated incredible courage and strength to help this new born country stand on its feet through exceptional sacrifices.

Let us reinvigorate that spirit, on the occasion of this Pakistan Day, to make our beautiful homeland a safer, stronger and progressive place.

On this occasion, I would like to reiterate the words of Quaid-e-Azam which he said on the eve of Pakistan Day on 23rd March 1944, “Let’s go forward, full of hope for coming years, with faith in our heart, unity in our camp, discipline in ranks, and I am confident of our success...”

Inshallah we will be successful. 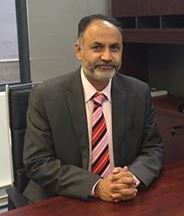 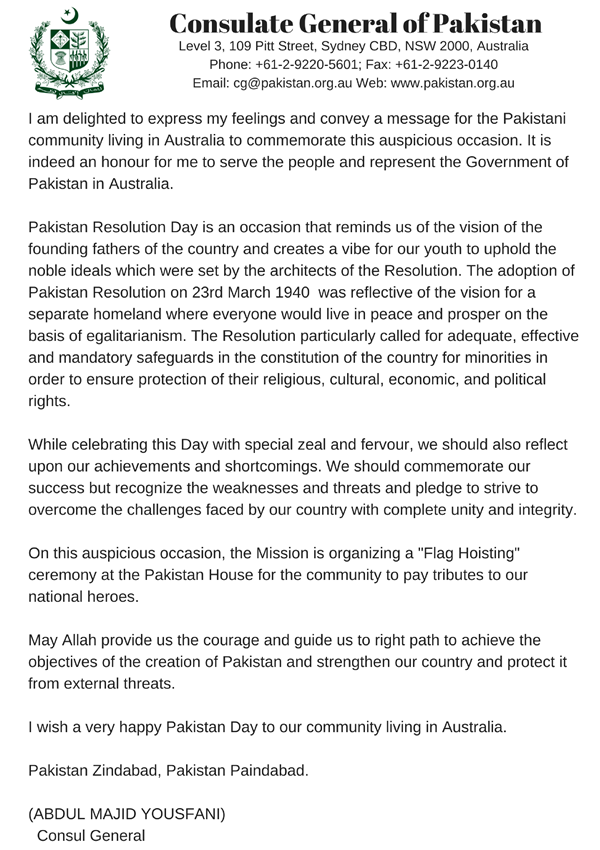 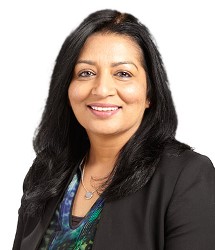 We are all deeply connected to Australia, the country we call home, but like all Pakistani-Australians, I am very proud of my Pakistani heritage. It’s the country where I grew up, where I was educated and also the country of my political awakening. My family was passionately involved in the struggle for independence and worked side by side with Mohammed Ali Jinnah and the massive people’s movement to have a safe and independent homeland.

This day is a good time to reflect on this struggle and also to think about where we our now – in a democratic and diverse nation. And it is the diversity in Australia that makes us a vibrant nation. We all contribute positively in making our nation prosperous and sustainable. And there is no doubt that immigrants have made enormous contributions to Australian economy and society in many ways such as bringing in new skills, setting up businesses, in the areas of technology and international business knowledge.

Pakistan was formed as a secular democratic state and one of Mohammed Ali Jinnah’s quotes makes this clear: “You are free; you are free to go to your temples. You are free to go to your mosques or to any other places of worship in this State of Pakistan. You may belong to any religion, caste or creed—that has nothing to do with the business of the State”. It is important to keep this in mind as the true intent behind the formation of Pakistan: that of a state safe for all minorities to live in.

Like me, many of you go back to Pakistan regularly and have an impact on creating positive change there as well. So on the occasion of celebrating Pakistan day, I’ll end this message with the hope for a peaceful, united and prosperous Pakistan. 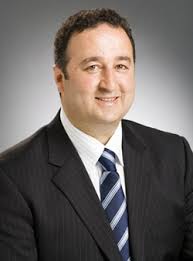 The time has come once again to wish you and all my friends in the Australian Pakistani Community a happy and unifying Pakistan Resolution Day. It is always a pleasure to join with our great Australian Pakistani community in celebrating defining moments in History as was the Lahore Resolution. This is a day that celebrates the struggles and achievements of the people of Pakistan lead by Muhammad Ali Jinnah.

I am particularly pleased to be part of this community that has given me the chance to develop deep links with the people of Pakistan here in Australia as well as in Pakistan. I am most grateful to the friendships I have forged with so many friends such as Former Consul General Azam Mohammed, Former CG Ejaz Ahmed, Former CG Abdul Aziz Uqaili, Former Deputy Consul General Shifaat Kaleem, Former Deputy Consul General Hamid Asghar Khan and many other community leaders too numerous to list. I thank them all for their kindness and friendship. 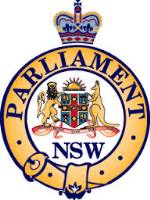 It was once again an honour for me to move and have the unanimous support of the Legislative Council of NSW endorse the motion below recognizing the significance of Pakistan Resolution Day and congratulating the Australian Pakistani Community in New South Wales on its contribution to the progress of our nation.

(a) 23 March is Pakistan Day, otherwise known as Pakistan Resolution Day or Republic Day, commemorating the date on which the Lahore Resolution was adopted in 1940;

(b) on the same date in 1956 the first constitution of Pakistan was adopted and enforced by the Pakistani Constituent Assembly, representing the changeover from the colonial Dominion of Pakistan to the independent Islamic Republic of Pakistan; and

(c) the Pakistani community in Australia has made important contributions and has helped make Australia a very successful multicultural nation.

(2)That this House notes the significance of Pakistan Republic Day and congratulates the Australian Pakistani community in New South Wales on its contribution to the progress of our nation. 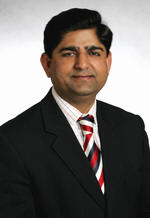 77 years ago, on the 23rd of March a crucial occurrence took place which changed the lives of many forever. This landmark day was the first huge stepping stone that marked the formation and beginning of the world’s first Islamic nation. It is the day when the Lahore Resolution was passed by the leaders of the Muslim league, since Muslims demanded their own state, cementing the formation of a new nation in the subcontinent known as Pakistan.

The 23rd of March is an auspicious occasion for Pakistanis all around the world as it highlights the astounding achievements and meticulous ability of our forefathers who have made it possible to call Pakistan our home today. Pakistan is a nation state that has accomplished tremendous victories through-out the world which have been acknowledged and appreciated. For instance, the Pakistani community in Australia has grown incredibly through-out the years with Pakistani Australians achieving in all careers such as doctors, engineers, real estate, finance, lawyers and so on.

I myself am a proud Pakistani Australian and it is a great pleasure that I am able to represent my community on an everyday basis. On behalf of the Pakistan Australia Business Council, I am delighted to send my warm wishes to Pakistan’s all around the world who would be celebrating the 78th Anniversary of Pakistan Day. May Allah bless our home land Pakistan and give us all the courage to strive towards making a better future for ourselves and our nation.Ameen