Koocha-e-Saqafat, Australia following its tradition of organising quality entertainment programs brings you another amazing show. This time the master of satire and humour writing, Anwar Maqsood, will perform in Sydney on Saturday 24 March 2018. So keep this evening free in your calendars while we finalise program details that will be made available to you very soon.

Koccha-e-Saqafat, in the past, has organised some of the most successful art and literary programs for Australian community in Sydney such as Batain Fun ki - Yadain Man ki, Colours of Love, Taleem-e-Balighan, Rubaru, an evening with Qavi Khan Aoo Manto Karain and many more. Through these programs, Koocha-e-Saqafat has established its name in the community and continue to strive for excellence. We believe that the upcoming solo show of Anwar Maqsood will again surpass your expectations. So get ready for an amazing event. 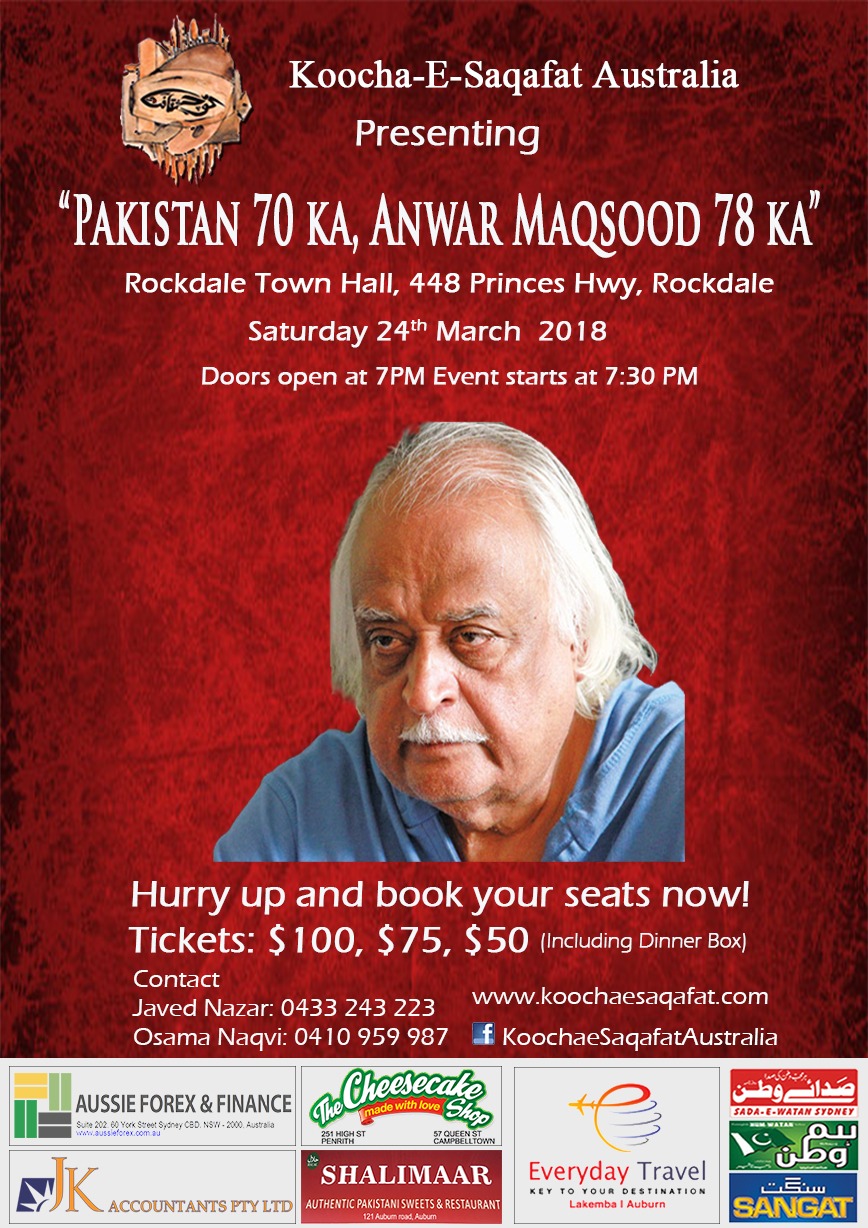 Anwar Maqsood Hameedi commonly known as Anwar Maqsood born in Hyderabad State, India . He is a Pakistani scriptwriter, television host, satirist, humorist, and infrequent actor. He is well known for his artists write ups for Pakistan Television Corporation in the late 1970s.

Anwar Maqsood was born on 7 September 1940, in Hyderabad State. Maqsood studied at the Gulbarga Trust School in Aurangabad. He belongs to several prominent families of Pakistan which include: his sister, Fatima Surayya Bajia who was a known writer in Pakistan and South Asia, his other sister Zehra Nigah, a known poet, his brother, Ahmed Maqsood, Former Chief Secretary of Sindh, and his other sister Zubaida Tariq, a cooking expert and chef. Prof Dr Syed Mujeeb Zafar Anwaar Hameedi is a well-known and keen scholar and professor from Federal Ministry of education (Islamabad) for Grade MP-I. His wife, Imrana Maqsood is a known novelist and his son, Bilal Maqsood is a rock artist and lead guitarist and vocalist of the rock band called Strings.
Maqsood has been associated for many years with Pakistan Television Corporation where he served as presenter for a variety of its shows including Studio Dhai and then Studio Ponayteen along with Show Sha and a large number of others.

Mr Javed Nazar, President Koocha-e-Saqafat Australia is a close family friend of Anwar Maqsood Hameedi. Mr Anwar Maqsood is coming first time in Australia and due to his engagement and busy Schedule he is performing live only in one show at Rockdale Sydney. For Further information and booking tickets, Please Contact Mr Javed Nazar on his Mobile: 0433 243 223