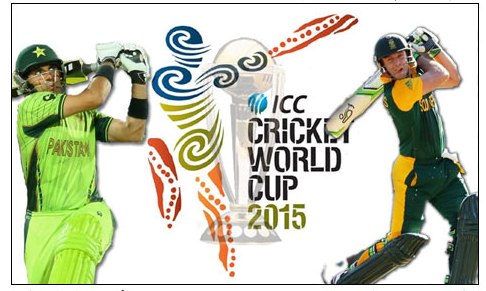 On Saturday, 07 March 2015, Pakistan V South Africa was played at New Zealand’s Eden Park which is largest stadium of central Auckland, New Zealand. There is a permanent capacity of 50,000 seats. Pakistan beats South Africa by 29 runs. Captain Misbah-ul-Haq once again stood out with a gritty 56 as Pakistan stumbled to 222 all out against South Africa in a rain-reduced 47 overs-a-side Pool B match of the cricket World Cup, in Auckland on Saturday.

On the behalf of the Australian Pakistani Community, the Editorial Board of Sada-e-Watan congratulated the Pakistan cricket team on their outstanding performance in the ICC Cricket World Cup match against South Africa and wish for team on winning an all Matches of world cup 2015. 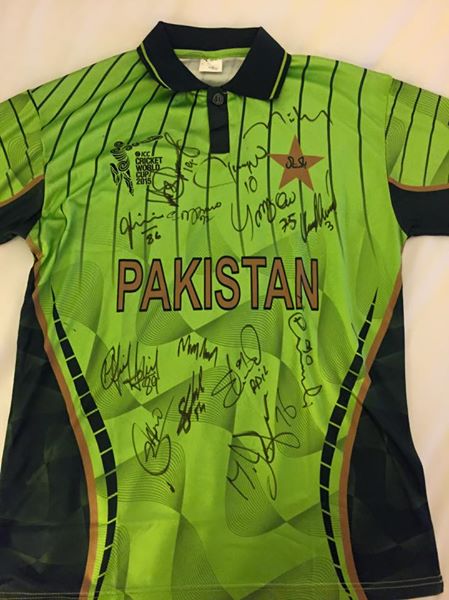 After the victory, Pakistan’s Federal Minister Ahsan Iqbal visited Players’ Lounge to congratulate the players, whose excellent team effort under Misbah's superb captaincy proved that Pakistan team is capable of beating any difficult team in the world. The players were praying later had dinner with them. Thank you Green Shirts you made the whole nation proud.Pak team presents Green Shirt to Minister Ahsan Iqbal Chaudhry who defeated Singer Ibrar ul Haq in the last election. 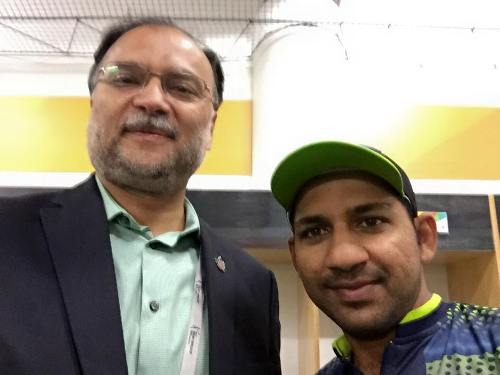 Minister Ahsan Iqbal and Man of the Match Sarfraz Ahmed 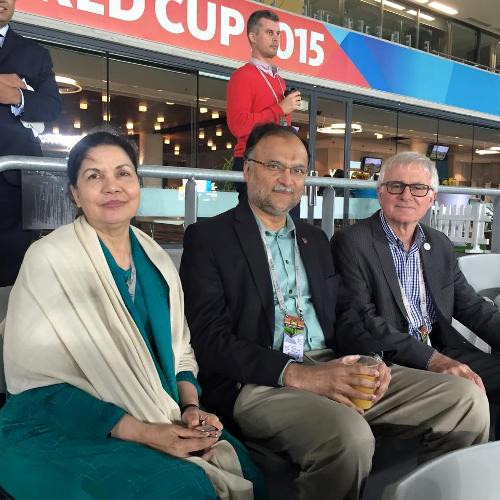 Minister Ahsan Iqbal watched live Match Pakistan V South Africa, the High Commissioner of Pakistan for New Zealand Zehra Akbari was also present during the Mach and their presence certainly was good feeling for the team, a kind of show of support at important game. 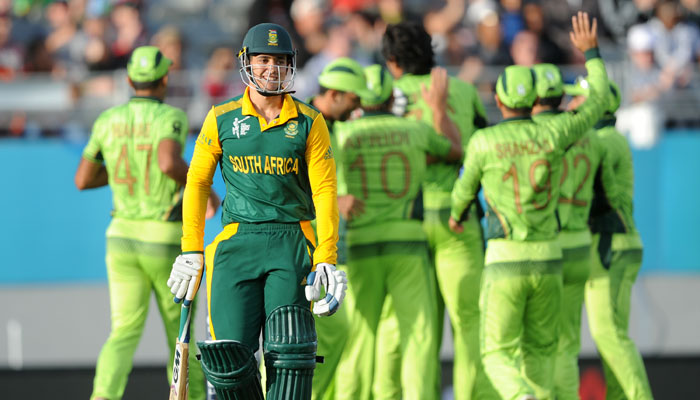 South Africa captain AB de Villiers has decided to bowl first after winning the toss in a crucial World Cup Pool B match at Eden Park in Auckland.
Proteas have made one change their squad that thrashed Ireland by 201 runs in their most recent outing. No.6 batsman JP Duminy has returned to playing XI after missing last two matches due to a side strain which means there is no Farhaan Behardien.

Pakistan have made two changes in that combination that defeated UAE by 129 runs last time out. Wicketkeeper-batsman has finally been awarded his World Cup debut, with opening batsman Nasir Jamshed making way for him. 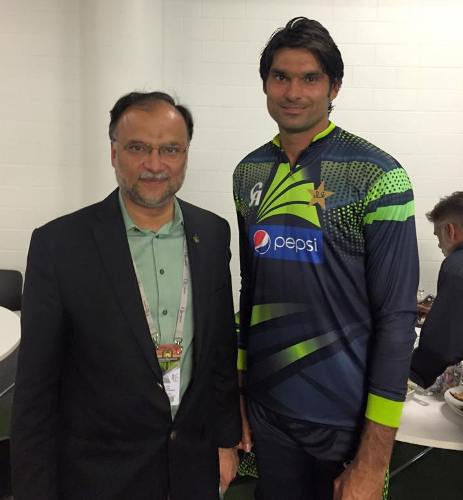 Veteran batsman Younis Khan, who was dropped for the last two games, has also made his way back into the playing XI as all-rounder Haris Sohail was not available for the contest because of a heel injury. 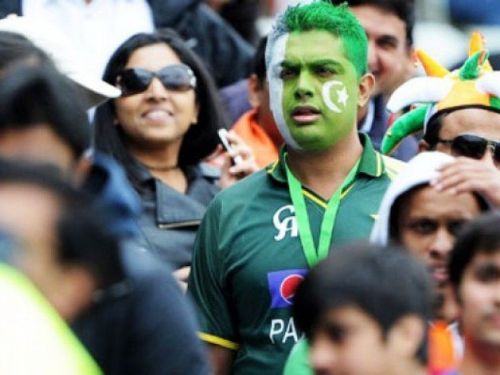 A large number of Pakistani Community settled in New Zealand was present in the cricket ground for raise the morale of team Pakistan who wish to see a good fighting spirit & a good Match. PAKISTAN pulled off a thrilling 29-run win over South Africa in the World Cup on Saturday after Proteas captain AB de Villiers couldn’t manage to carry his team to victory as his team mates collapsed around him.
Pakistan scored just 222 in its rain-affected innings and appeared headed for defeat against South Africa’s powerful batting lineup. The Proteas, needing 232 to win under the Duckworth-Lewis system, raced to 1-67 after nine overs but then collapsed, losing five wickets for 35 runs. 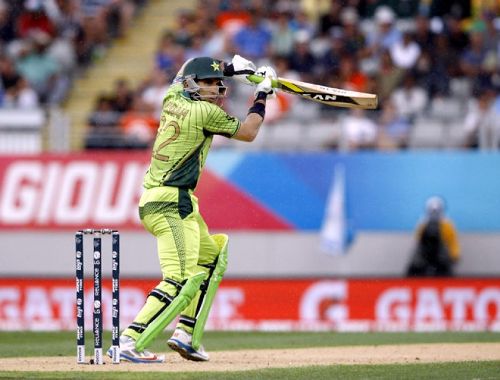 Misbah: 'It's a big win, much needed win for us. We were in a situation where we have to win both games. So I think wonderful performance by everybody. We just had got a good start, Sarfraz really played well, Ahmed Shehzad gave a good start and Younis Khan played really well today. We were I think 30-40 runs short at the end but the bowlers, the way they just did the job was wonderful. The plan was simple. When you are going with 4 strike bowlers, the plan is very simple and the opposition also knows that we are going for wickets and we are going for the kill. That's what the bowlers did. We don't have any chance when you are defending 230 or 222. Only chance is get wickets and get the opposition all-out. We are really doing very well. Of course, beating South Africa, who are really playing good cricket, everybody knows that they are a wonderful side so after that everybody believes that, all the players and team, they are confident. I think next game is going to be really important for us. We can take a lot of confidence from that, but we need to be focussed because that's must-win game for us and I think momentum goes with that in the knockout stage. So anything could happen. When runs are on the board, there is always pressure on the opposition. Once they are under pressure it's really difficult. As cricketers, we know how difficult chase could be and when your bowling is so strong, all the four seamers are bowling really well. That was the plan, keep trying to take wickets. I think they wonderfully responded.'

de Villiers: 'We still are in a decent position in the group, but I never enjoy losing, it's really painful. We just didn't play really good cricket today. I thought we were right with the ball in hand and shocking with the bat. I expect us to get more partnerships going for the top seven batters. It's never nice to lose games of cricket, I am not going to be happy with that. I won't say we felt uneasy. I won't say once again because we've been under pressure in many situations in the last few years where we've come out on top. I still believe that we've got the right group here to lift the cup. It wasn't easy under lights. But there's no reason why we shouldn'e be chasing those sort of total.' 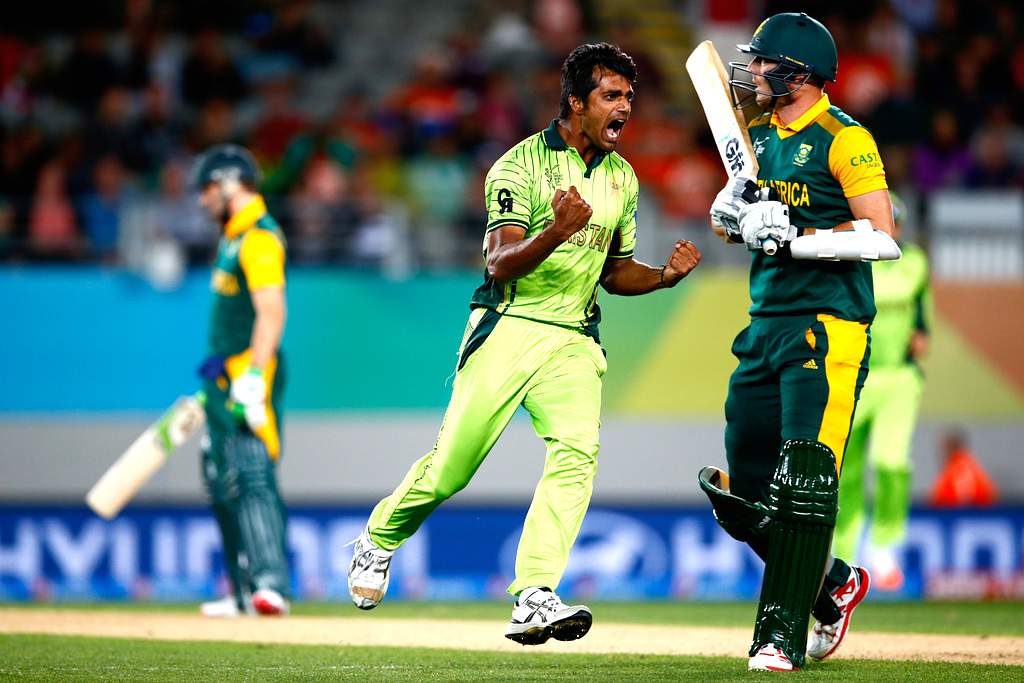 Sarfraz: 'Thanks to all the supporters for supporting me, especially my parents. I was very patient. I treated this as a debut match. There was a bit of pressure playing against a world-class bowling line-up, but thankfully I did well today.'
Sarfraz Ahmed is the Man of the Match With this stunning win, Pakistan have made a great comeback. In fact, this victory was Pakistan's first win against South Africa in World Cups. It also opens up Group B and the Ireland versus Pakistan clash will turn out to be a key encounter for both the sides. On the other hand, South Africa need to do a lot of soul-searching after they yet again failed to chase down the target. 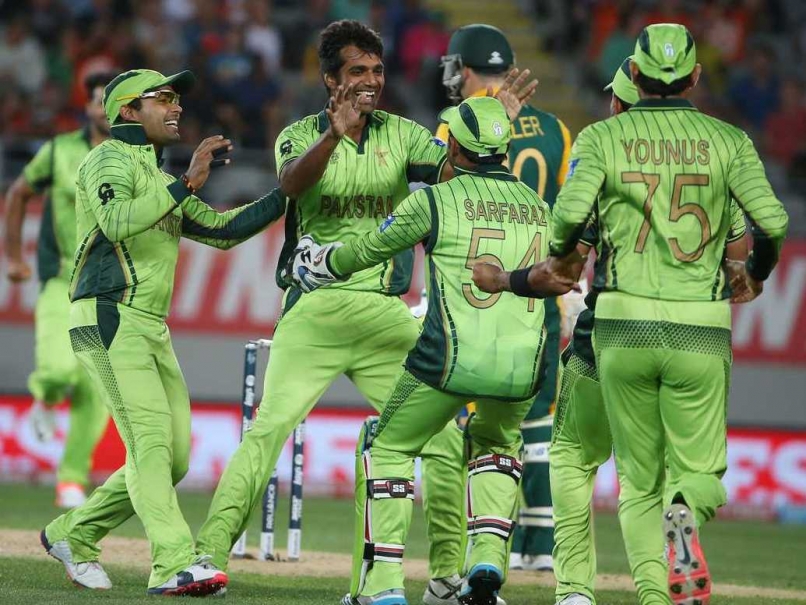 Earlier, South Africa's key bowlers, Dale Steyn and Morne Morkel shared five wickets between them to give the Proteas the upper hand. Pakistan seemed to be moving towards a position of strength, when Sarfraz's spark of inspiration with the bat in hand gave them a rousing start. However, once he was dismissed, they lost the plot. Misbah-ul-Haq tried to steady the innings and Afridi landed a few hefty blows, but Pakistan ended up with what seemed like a slightly below par total. Due to rain, the game was also reduced to 47-overs-a-side.

It all came down to whether de Villiers could stand alone amidst the ruins and touch stratospheric peaks to take the Proteas to a monumental victory. de Villiers certainly played bedazzling shots. In fact, when de Villiers was exploring every nook and cranny of the ground, the palpating anxiety could be seen in the Pakistani camp. After playing thunderous shots to thump Riaz all over the park, he showed twinkle-toed footwork and used the crease brilliantly to bewitch the crowd with two sixes of Shahid Afridi's bowling. When Riaz came into the attack and bowled a low full toss, de Villiers nonchalantly smashed him for a six and gave a glimpse of his ability to play versatile shots by cutting the next ball over cover-point for a boundary. However, he just didn't get the support from the other end and de Villiers was eventually, dismissed by Sohail. Sarfraz Ahmed too made his presence felt by taking six catches.

Amla, with his surgical-like wrists, threaded through the minutest of gaps to collect boundaries square of the wicket on either side. On the other hand, du Plessis rocked back to play pull shots with a touch of adventurism. But once both of them were dismissed, the pacers ripped through the middle-order. If Irfan extracted pace and bounce, then Rahat got the ball to swing and seam to keep the opposition's batsmen on tenterhooks. The point can be illustrated by Rahat getting the ball to jag back sharply to trap David Miller plumb in front. Wahab Riaz mixed it up cleverly to land crucial blows. Sohail Khan also made his mark by snaffling the important wicket of de Villiers.

Pakistan's battery of fast bowlers put up a heart-stirring performance to help them upset the apple-cart and defeat their fancied opponents. Even AB de Villiers' majestic brilliance wasn't enough to stop Pakistan from registering a memorable win. After notching up a modest total on the board, it was Mohammad Irfan, who gave Pakistan a fabulous start by snaring the wicket of Quinton de Kock with a peach of a delivery. Irfan got the ball to shape away from the left-handed batsman and with him extracting disconcerting bounce, de Kock could only edge it to the wicket-keeper. Hashim Amla and Faf du Plessis then looked to resurrect South Africa's fortunes by essaying a slew of boundaries.

The Pakistani fans are absolutely elated. Riaz runs to Irfan and hugs him. The entire Pakistani team form a huddle and celebrate. South Africa will be gutted. This was their match after the start they got from Amla and du Plessis, but Pakistan have played some inspirational cricket to turn the match on its head. The Pakistani players shake hands with their opponents. It started to drizzle as the players walk off the field. 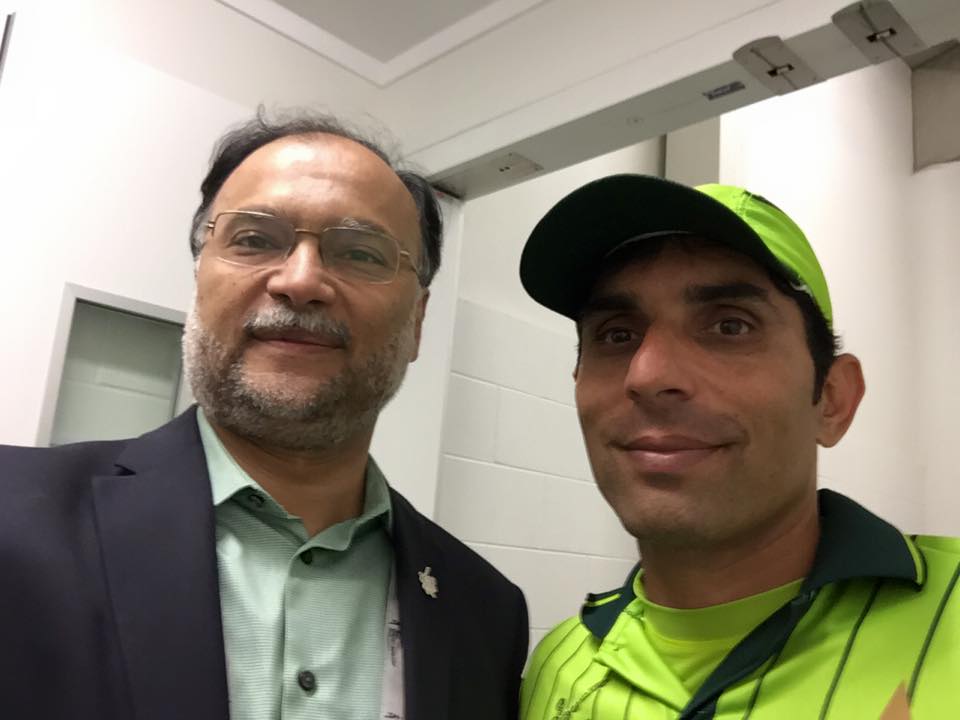 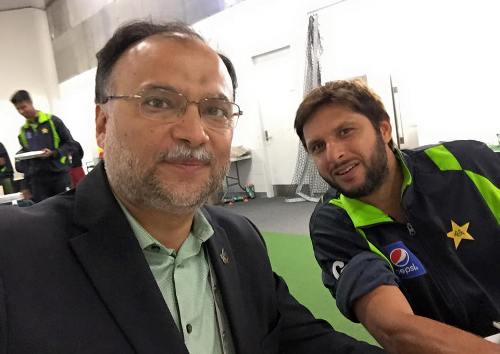 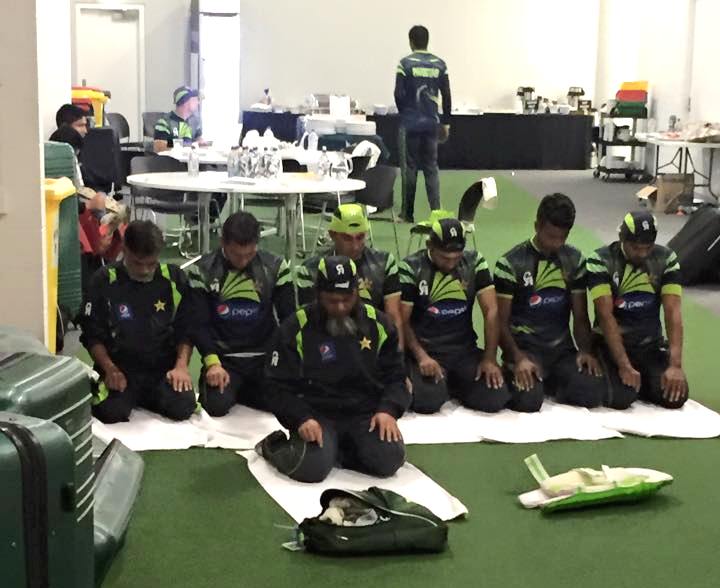