After the resounding build up of enthusiasm and exhilaration, Muslim communities had the opportunity to finally mark the celebration of Eid-ul-Adha at the nationally renowned Sydney Multicultural Eid festival at Paul Keating Park, Bankstown Sydney.

To further ensure a stronger, unified and multicultural society in Australia, the Islamic Charity Project Association once again warmly embraced thousands of people from a variety of ethnic cultures to celebrate the festival of sacrifice, which is the second of two major religious occasions celebrated annually on the Islamic calendar. The welcoming of people from different parts of the world illustrated the versatility and essence of harmony irrespective of caste, gender or culture. 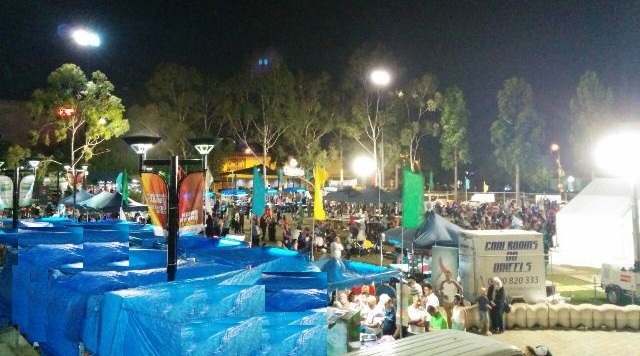 The festival showcased the valued participation of the entire community in celebrating and valuing cultural diversity, tolerance and social cohesion. The Muslims embraced each other with joy and exchanged their greetings in spirit of peace and unity.

The vivacious atmosphere of the event resounded tears of longing as Muslims reflected on the blessed lands of Makkah and Madina. Various people from all walks of life gather together at those blessed lands symbolizing unity and their submission to their creator, Allah.

Participants were also treated to thrilling rides, enriching live Islamic chanting performances, face painting, stage entertainment (karate performances) abundant stalls of food, clothing, books, home wares, increased variety of rides, prayer facilities for women and overall enhanced organization and management.
Another highlight of the event was the kid’s show that was presented live at the grounds of Paul Keating Park, Bankstown. The presenters gave exclusive opportunities to many children to participate and be rewarded and recognized for their efforts. 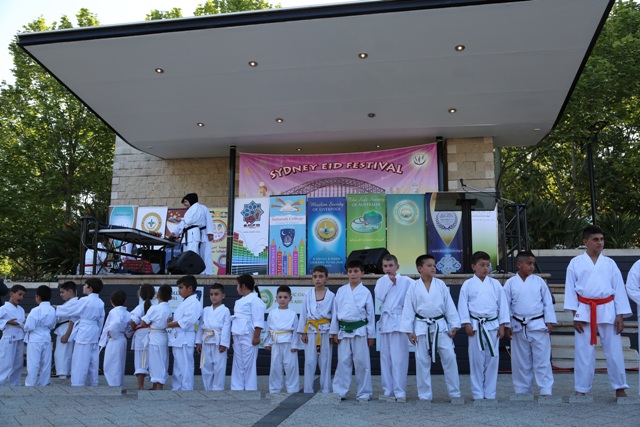 Among those present at the event were dignified Islamic leaders and imams, distinguished political leaders from the federal state, councillors and community leaders with the guests came the message of moderate Islamic values and principles in order to continue to help the Muslim community amalgamate within the social fabric of Australia.

The moderate and harmonious values and principles of Darulfatwa Islamic High Council were echoed at the Sydney Multicultural Eid festival. 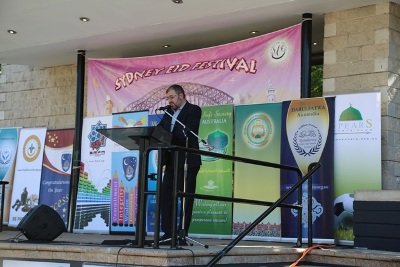 The president of the Islamic Charity Projects Association Dr Ghayath El Sheleh OAM made it known that the ICPA continues to work effectively to strengthen the ties among all individuals who have made Australia their homeland. 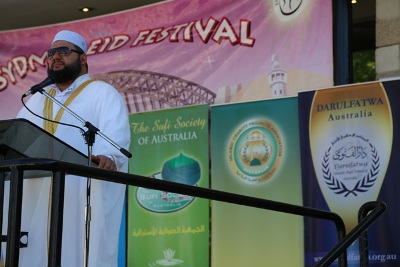 His imminence Dr sheikh Salim Alwan the chairman of Darulfatwa of Australia acknowledged the significance of propagating the true teachings of Islam.
“There are many people in Australia who unlawfully use the name of Islam to promote acts of ugly terrorism and extremism and so we should continue to stand strong against extremist and terrorist activities” Dr Sheikh Salim Alwan affirmed.

David Coleman, MP federal member for Banks and representing the Prime Minister Tony Abbot payed tribute to the Islamic Charity Projects Association for the impressive work that they do in the community as well as contribution they have made through 2MFM, with the youth and senior citizens.
Furthermore, Mr Coleman relayed a message from the Prime Minister of Australia, Tony Abbott who congratulated the Muslims on the blessed occasion of Eid-ul-Adha and acknowledged Australian Muslims as a vital part of Australia. 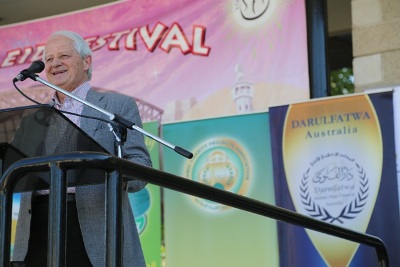 Federal member for Berowra, Phillip Ruddock declared that it was special to him to be invited to the Multicultural Sydney Eid festival and strongly recognized the strength of the Islamic Charity Projects Association.
“I am proud of your engagement with the broader community, particularly through the radio”. Mr Ruddock said. 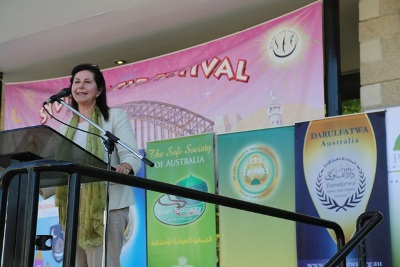 Senator Concetta Fierravanti-Wells recognized that the focus of Islam, contrary to what is sometimes heard in the press and in other places is that it is the religion of giving and a religion of thinking of the less fortunate.

“On behalf of the government, we support you and we want to continue to work with you and by working together we can foster that strong of belonging and commitment and family”
“Intolerance has no place in our society”
no room for intolerance, racism or prejudice
Also thanked the Islamic Charity Projects Association for its tireless work in so many different areas in the community.
“On behalf of the government, can I reiterate the message that the Australian Muslim communities are a valued and integral part of contemporary Australian society”.

Matt Kean, MP member for Hornsby representing the premier of NSW Mike Baird strongly accentuated his support towards the Muslim Community.
“It is particularly a great honour for me to be here today to say thanks to you, for the work your doing in building unity in our community, we will stand with you shoulder to shoulder to stamp out intolerance and to stamp out those that have a view that difference is unwelcome”. 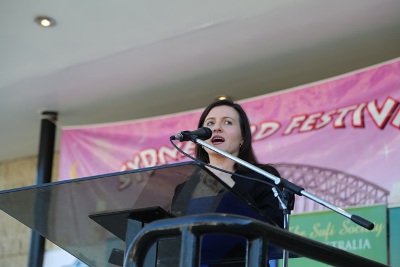 Tanya Mihayluk member for Bankstown representing the leader of the opposition of NSW – Mr John Robertson also recognized and congratulated the incredible contribution and work exerted by the Islamic Charity Projects Association.

“This is the organization that I have seen grow from strength to strength and they have demonstrated through a whole range of different programs that the ICPA and Darulfatwa works strongly not only with the Australian Islamic community but also the broader Australia community in uniting this community”. 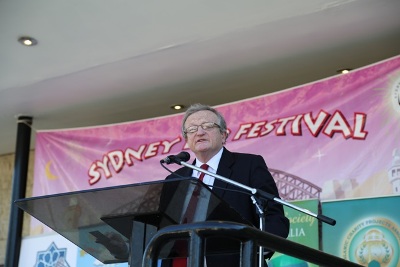 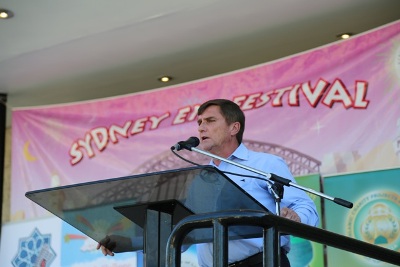 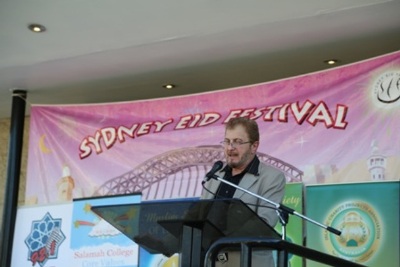 “2MFM working against extremism and radicalization is not a new initiative developed overnight, rather since our first air time in 1995, one of our key aims and strategies was to project the true moderate views of Islam, to steer youth listeners against radical and fanatical ideologies” Mr Muhammad Mehio President of the 2MFM board. 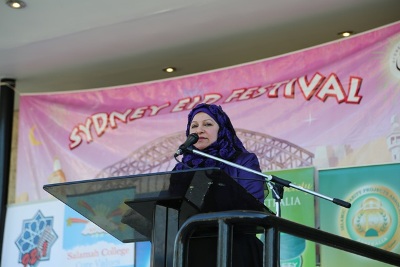 Finally, Mrs Faten El-Dana – President of the Muslim Women Welfare of Australia underlined that the “overwhelming majority of Muslims of living peacefully in Australia and oppose extremist views of some overseas militants" She also urged the broader community for more tolerance and understanding.

The Muslim Women Welfare of Australia are at the forefront of addressing important community issues through active community participation in a civilized and harmonious manner which upholds Islamic values”. 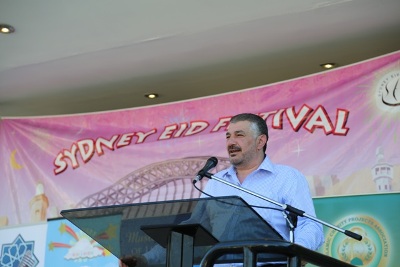 The words expressed by the important leaders highlighted the hope that unity, peace and security will be continuously upheld among the Muslim communities in the wake of the great festival.

Without any failure or disappointment, the event sustained its objective of playing an immense contribution of igniting the richness and flavour of the occasion with enormous passion and pomp.
The luminous fireworks that brightly illuminated the night skies exemplified a spectacular attraction and brought the culmination of two days of Eid-ul-Adha festivity and celebration.

The Islamic Charity Project association extends their deepest appreciation to those who contributed to the success of the event. We ask Allah to endow upon us goodness and blessings from this auspicious occasion.