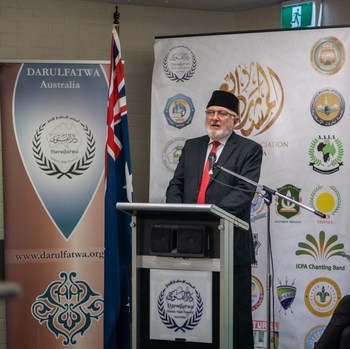 Darulfatwa Australia is The Islamic High Council of Australia serving Muslims and interested parties in Australia and abroad. They fight radicalism with moderation and ignorance with knowledge and aggression with peace and social harmony. Darulfatwa Australia every year arranging exclusive Grand Multicultural Mawlid Concert in Sydney and thousands attend every year.

“Bringing together in peace, joy and friendship,” Governor of New South Wales Her Excellency, the Hon. Margaret Beazley’s words defined the ethos of Mawlid 2022: The Story of Prophet Muhammad, A Way of Life on Sunday the 16th of October at Sydney Olympic Park Quay Centre.

Over five thousand people from all different walks of life came together to celebrate the birth of Prophet Muhammad (peace be upon him), in one of the largest Mawlid celebrations, all chanting together this year’s slogan – “The life Story of Prophet Muhammad, A Way of life”. 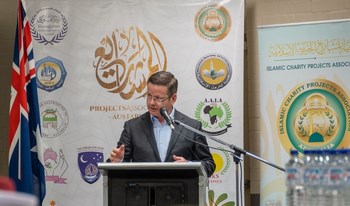 Her Excellency Governor NSW Margaret Beazley, spoke of the Islamic significance to the Australian fabric of society opening her speech in the language of the Gadigal People. As Mr David Hurley, His Excellency highlighted in his letter, “Australia’s great strength is our diversity.” With the Prophet’s mercy (Peace be upon him), extended throughout History, patience and peace are the core of Australian values in a society recovering from a global pandemic. Mr. Wissam Saad highlighted this, “Hardworking people bring success to such a beautiful event.” And the Mawlid of 2022, post the COVID challenges, was nothing less of a grand successful event.

A spectacular blend of colour emerged from the dimmed lights, neon lights and the phone devices swaying in the air recording, shadows of moons on the walls alternating with the green balloons that filled the amphitheatre as the full stadium in unison chanted the salutations upon Prophet Muhammad (Peace be upon him). A grand introduction in the celebration of the best of all creations!

A spectacular way of life at that, the 13th Annual Multicultural Event organised under the patronage of Darulfatwa showcased the post-covid resilience of Australians and Muslims from all around the world. As Mr. Mohamad Mehio, President of Islamic Charity Projects Association (ICPA) addressed the invited distinguished guests in the VIP function, “ICPA is the forefront of moderation teachings, binding the community, bridging gaps to protect society from extremist ideologies.” The VIP’s MC Mr. Wissam Saad, Principal of Salamah College, welcomed dignified Sheikhs, Imams and Religious leaders.

The event’s MC Mohab Saydawi began with a heart warming welcome rich with metaphors emphasising the compassion of the Prophet (Peace be upon him). The Life story of Prophet Muhammad – A way of Life.

Sheikh Ahmad El Kheir subdued the excitement to a spiritual cleansing in his Quran Recitation before children took to the stage in red, white, and green. “The Guide was born” echoed through the stadium in a heart stopping performance that made a full stadium chant in unison – A way of life. And the full stadium chanting in unison did not stop there, the audience were in-sync with Dr. Sheikh Ibrahim Elshafie as the magnificent crowd commemorated the birth of the Prophet (peace be upon him). “A surge of light piercing the darkness of time,” the Muslim fabric of the Australian society showcased the teachings in the way of life that assisted all Australian Muslims in their resilience and recovery from a global pandemic.

One of the many highlights included ‘The International Chanting Band. Malay began the performances, mesmerising the crowd with the purity in their voices “The noble and best of all creations” echoed through the stadium. The Bosnians chanted the name of “Allah” in a harmonious voice capturing a spiritual silence in the audience. The Australian band followed opening in a euphonious voice “He gave us all our identities.” The crowd cheered loudly and passionately to “Let Him Lead” capturing the full Quay Centre audience in their love for the Prophet’s way of life.

The Indonesian band followed in colours of red and white, against a backdrop of landscapes and greenery, brought the Indonesian Australians to their feet in “Poets are powerless to portray.”
The Pakistani band ignited the whole stadium into a rhythmic beat in “How beloved is the one who took care of me.”

The African band cheering rhythmically moving across the stage in the richness of the African culture captured the in-sync applauding of an energetic crowd shaking the stadium. Once the Sudanese entered on stage,
“Diversity is Australia’s greatest strength”, came to life as the Australian Sudanese group start performing on the stage rejoicing their love for the Prophet and in the diversity of Australia’s identity.

Iraq, the final performance of the international band left the audience clapping and swaying together engulfed in their spirituality to the purity of a clear voice chanting “Taha the best of all creations, love and obedience to gain his intercession.” The International Band brought to the forefront the Way of Life of Prophet Muhammad (Peace be upon Him) uniting the Muslims from all parts of the world. 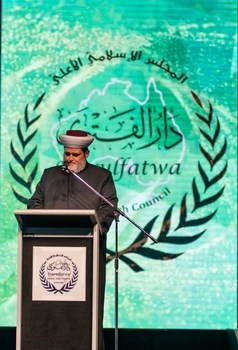 He said On the 12th of Rabi^ ul-‘Awwal of every year, an honoured and glorified memory shines over the whole world, and is commemorated by the entire Muslim world. They celebrate the birth of the best human, our Master Muhammad (Peace be upon Him).

The Australian Islamic Chanting Band with world vocalist Mohammad Al Kheir soon entered the stage mesmerising the crowd. Phones recording swaying in the air, balloons floating high, arms in unison either swaying or clapping, a spectacular backdrop of mosques, the name of Prophet Muhammad (Peace be upon Him) echoing off the walls of the stadium, smoke and sparks filling the sides of the stage with beating drums shaking the stadium to its feet, a full crowd of strangers became one,
under the umbrella of the Prophet’s way of life. A mesmerising moment in time, full of joy, happiness, and new formed friendships in a love of the best of all creations.
The Grand Mawlid was a success, and it could not have been described better than Mr. Wissam Saad in is opening address, “You can go home and say WoW! That was Great!”
Darulfatwa extends its appreciation to all community organisations contributing to the success of the historic evening. 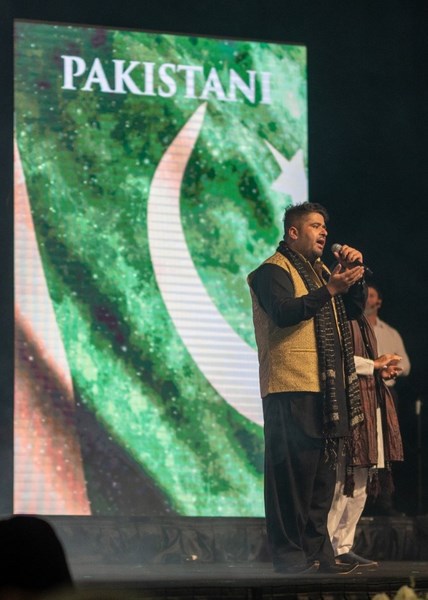 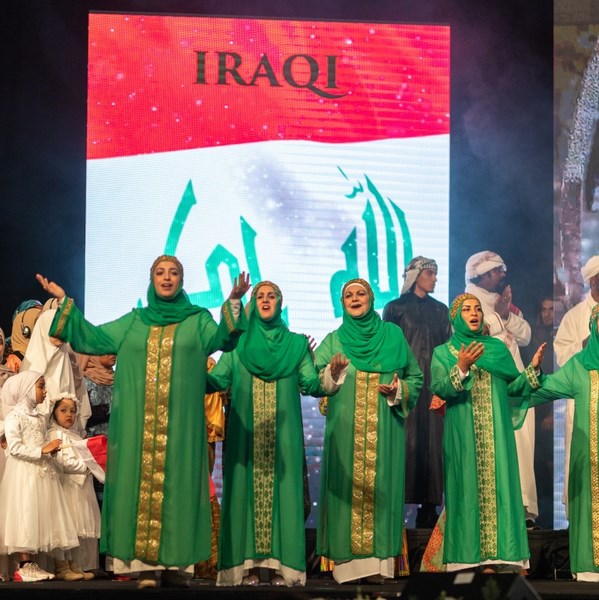 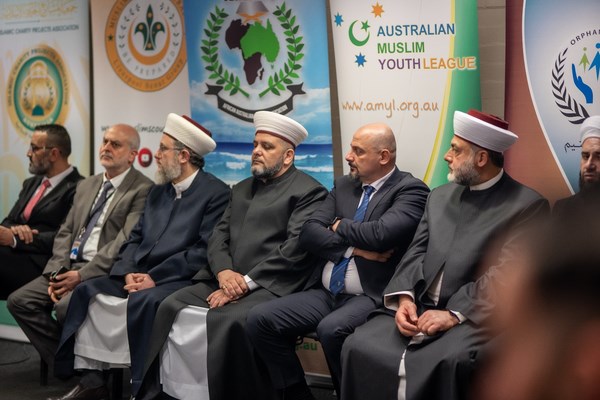 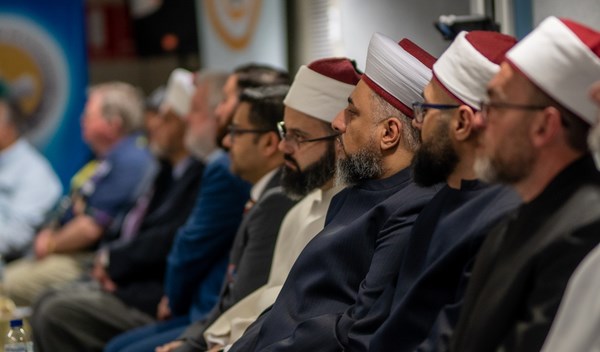 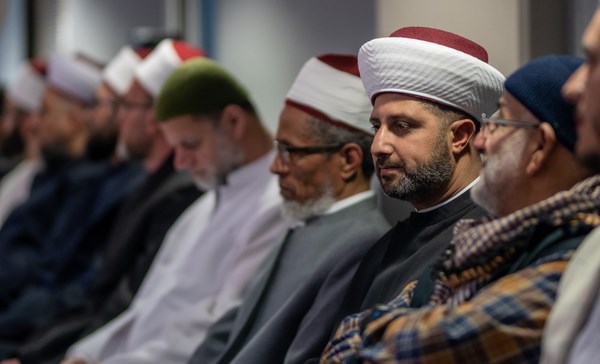 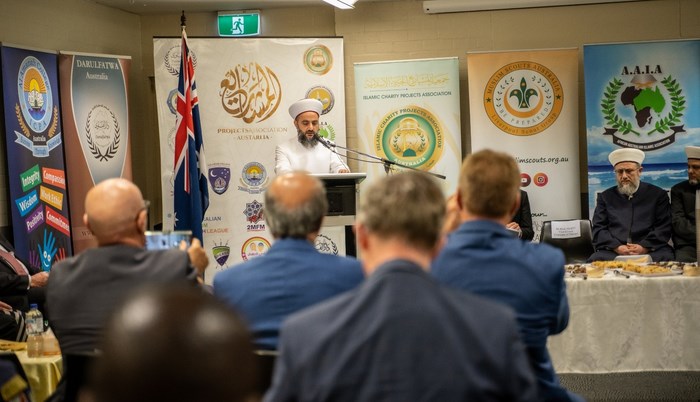 Imams on stage with the Trace of Prophet Muhammad 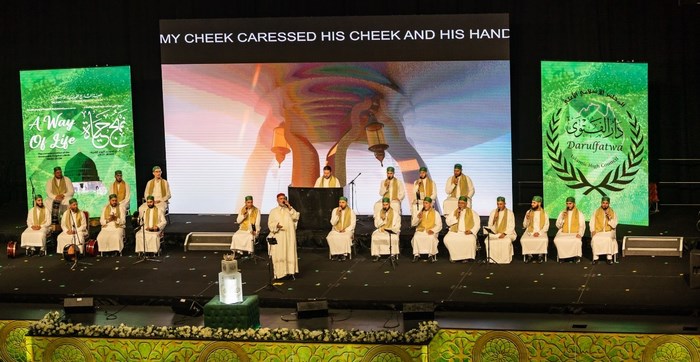 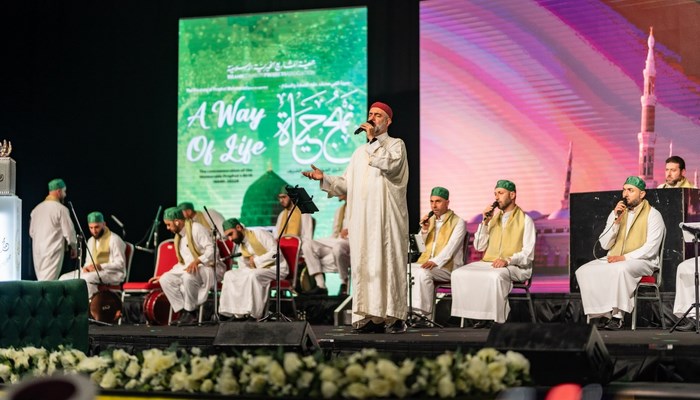 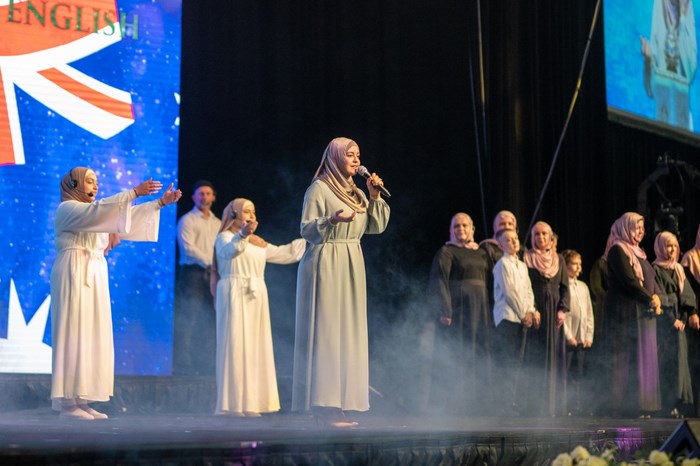 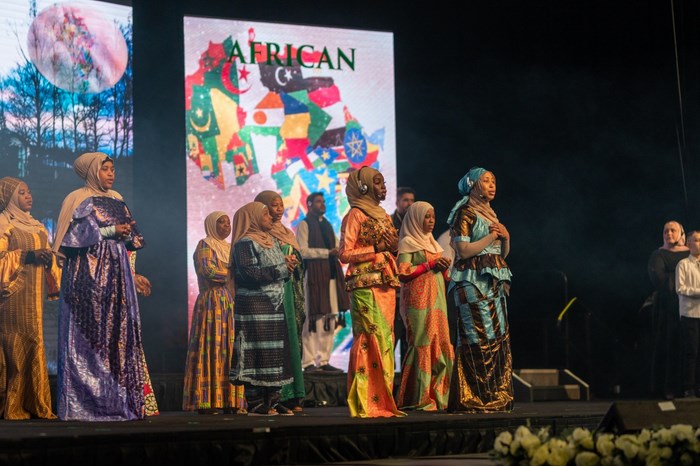 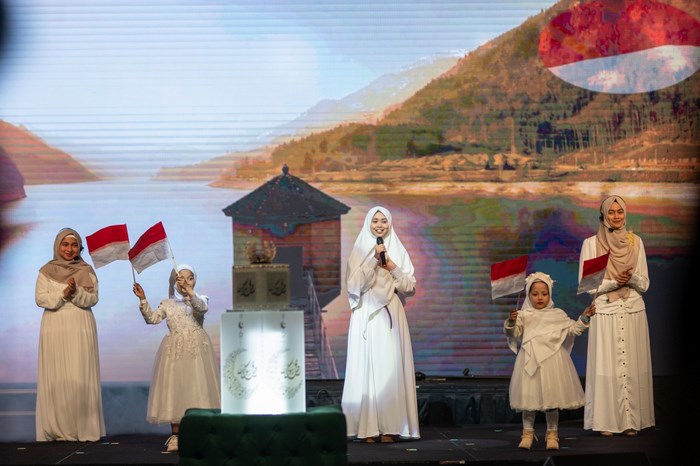 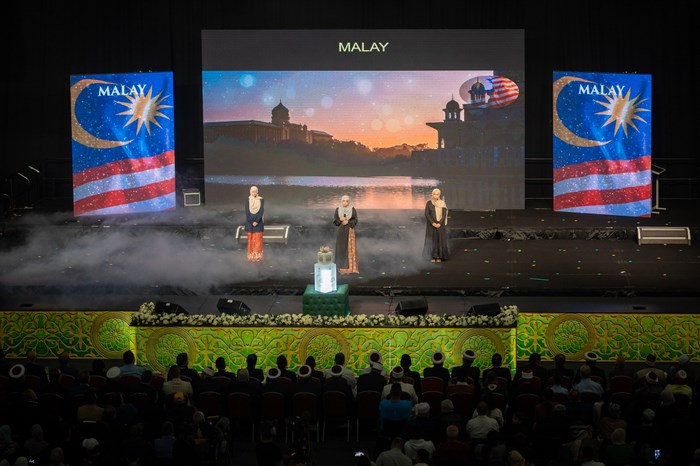 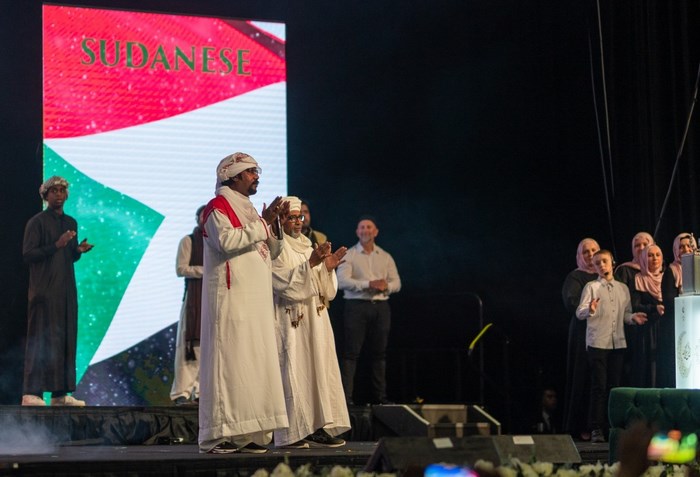 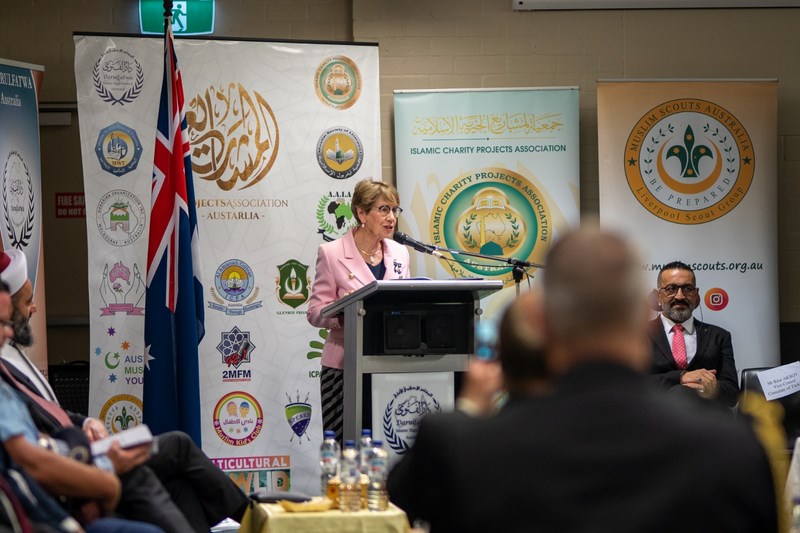 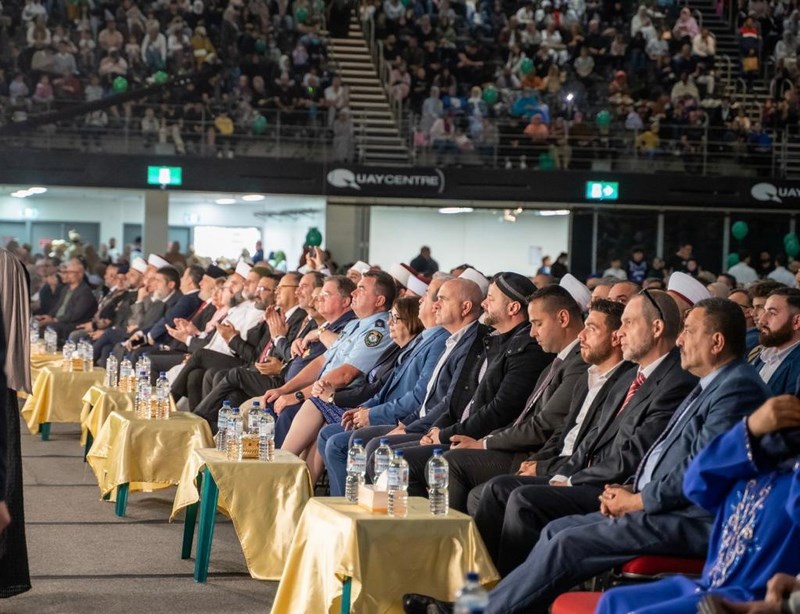 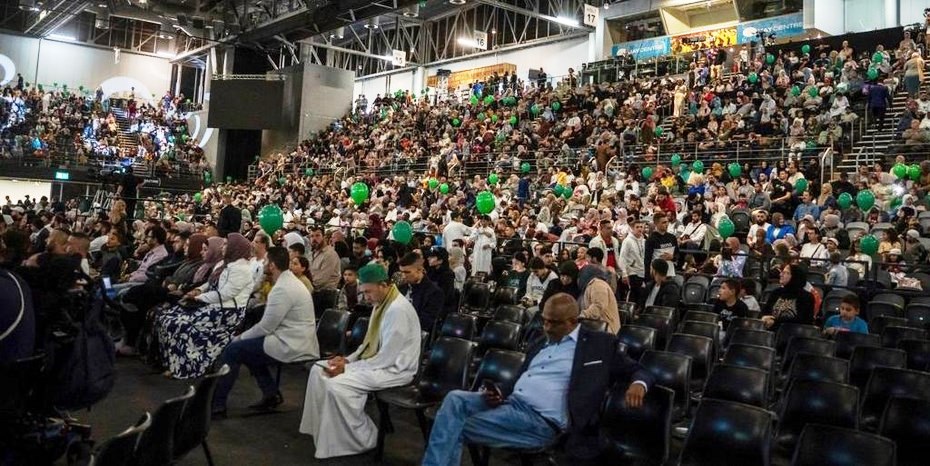