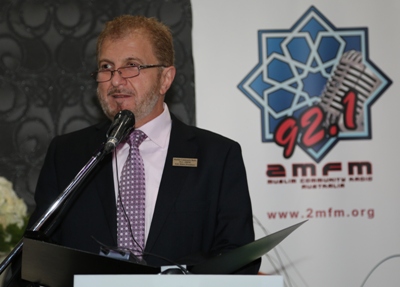 2MFM has represented the plethora of linguistically and culturally diverse groups in the Australian Muslim community for two-decades. 2MFM has played an integral part in making a strong and ethnically diverse voice for all. This resounding, multicultural, multi-lingual and multi-award winning voice was accurately echoed through the 2MFM Annual Corporate Dinner 2014 fostering the theme: The voice of diversity. 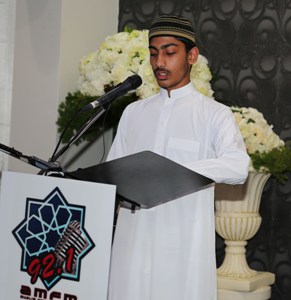 Following the opening speech presented by MC Ola Nafeh, the dinner commenced with an inspiring recitation from the holy Qur’an performed by Muhammad Hazarvi. With a Pakistani heritage, Muhammad is a student of Al Amanah College who is Hafith of al Qur’an who memorises the whole Qur'an off by heart.

The National Anthem was then followed by a speech delivered by the 2MFM president Mr. Muhammad Mehio who acknowledged that the role of the Muslim Community Radio, 2MFM, is paramount in helping to build diversity, inclusiveness, an ethnically diverse Muslim community and project the moderate teachings of Islam.

“Our work at 2MFM is geared towards social cohesion, integration and using radio as a medium to serve the Muslim community” he said.

“Our staff, sub-committees and volunteers continue to bridge foreseeable gaps and use radio as a medium to help build diversity across our radio airwaves”, he added.

As one of twenty-two organizations affiliated with Darulfatwa – the Islamic High Council of Australia, 2MFM was proud to be recognized by his eminence Sheikh Ibrahim El-Shafie as an imperative mechanism of projecting the moderate face of Islam and strengthening the ties of harmony and cohesion amongst fellow Australians.

“The role of the Muslim Community Radio has been vital in stressing the importance of maintaining a collaborative, harmonious and multicultural society” He said. 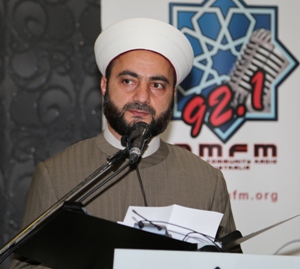 “2MFM’s work against extremism and radicalization has been established since its first broadcast on air, to project the true moderate teachings of Islam and to protect our youth against radical and fanatical ideologies”, Sheikh El Shafie Added.

The event also consisted of a video clip presentation which captured the services, consultations, events and activities of 2MFM that foster ongoing engagement and community participation.

The prime Minister of Australia Mr Tony Abbott kindly shared his Message through a personalized video message about 2MFM in which he stated:

“For nearly 20 years, your station has served the Muslim Community in Sydney; you broadcast news and you give the wider community the chance to learn more about Islamic faith and culture. “Muslim Australians are part of an inclusive and cohesive Australia. Together we are building a country which is a beacon of hope and optimism for people from right around the world. I thank Muslim Community Radio for your work in supporting the community”, the prime Minister concluded. 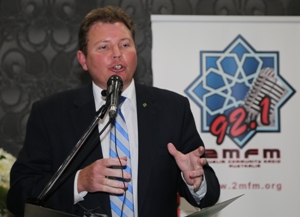 In a letter to 2MFM on the event Senator Conchetta Fierravannti-Wells wrote:

“I acknowledge the great work 2MFM does in serving the needs of listeners and the community across Sydney”. This message was conveyed by Mr. Craig Lundy.

“As the parliamentary secretary with special responsibility for multicultural affairs and settlement services, I’ve enjoyed and appreciated the opportunity to engage with 2MFM on different occasions. I’m confident it will continue to build on its success of serving the needs of Sydney’s Radio audience”, she said. 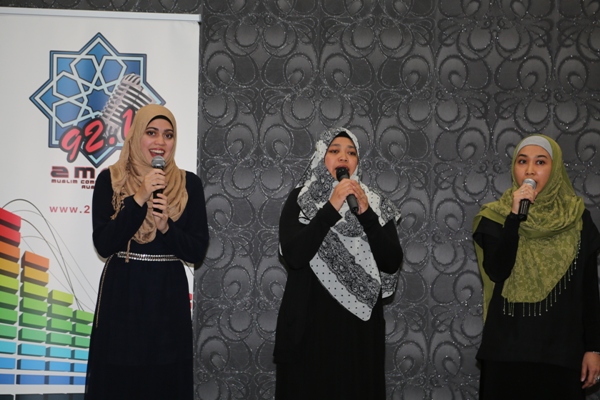 This followed a powerful, Multilingual performance in English, Arabic, French and German with catching rhythm and impassioned lyrics that evoked an enthusiastic response from the audience. The multilingual musical presentation Muslims of the World imparted a significant message about the proper stance that Muslims take on terrorism. It’s not only a spectacular example of melodic flair, but more prominently a powerful and influential expression of Muslims standing against acts of terrorism especially those done in the name of Islam.

Among the lyrics of the musical piece are:

“We all denounce terrorism

We stand against it in deed and word

This is our belief, our unwavering ideal

And we are the Muslims of the world”

The musical piece is a resounding voice for all Muslims regardless of race, language or skin color. 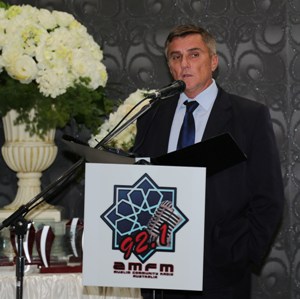 Then, the member for East Hills Mr. Glenn Brookes and representing NSW Premier Mike Baird, underpinned the importance and the value of the volunteers who help make a difference at 2MFM. He also shared a message from the premier who said:

“Muslim community radio provides the Islamic community with a multi-lingual station that supports multiculturalism, Islamic events and the important Islamic periods of significance throughout the year”.

“I congratulate 2MFM for supporting a diverse and harmonious NSW and for the promotion of peace, Islamic culture practice for all people from all backgrounds and call NSW home”, he said. 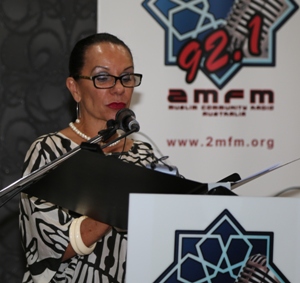 "Can I just deliver the message, as well from myself, the Labor party in NSW that our role within the parliaments of this country is to provide leadership, and it is leadership you will get. Leadership in blowing up the ignorance that is pedaling some of the racism in this nation about your communities, about your faith”, she said.

“Congratulations to the radio station, I love radio, it’s just a fantastic effort", she concluded. 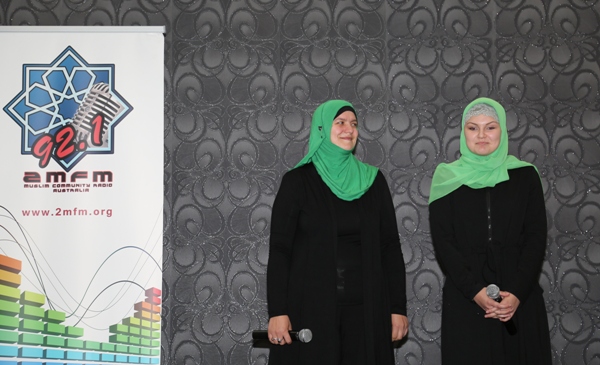 At that juncture a sensational line up of Bosnian vocalists captivated the entire audience with their charismatic tune and proficiently vivid performance that well displayed the distinctive charisma of their Bosnian cultural identity. 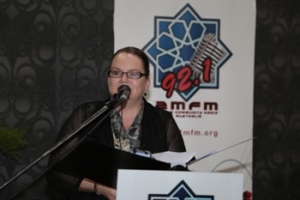 From the Community Broadcasting Association of Australia, and representing CBAA president Adrian Basso, Ms. Amy Moon affirmed that 2MFM is setting an example for other stations in the community broadcasting sector and adhering to the guiding principles and codes of practice like promoting harmony and diversity, contributing to a culturally diverse Australian Community, pursuing the principles of access and equity and increasing community involvement in broadcasting. 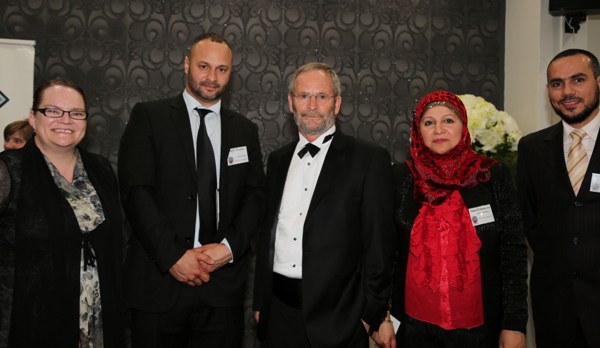 “2MFM is a long valued member of the CBAA, it is particularly unique in the broadcasting sector, it is a station that engages the ethnically and multicultural community within its metropolitan licensed area to be actively involved in broadcasting”, She said.

“The award for excellence in community participation was not only for one particular event or occasion but was for the ongoing operations and practices that this radio station adheres to every single day that it broadcasts” she added.

Ms Moon also acknowledged the two awards that 2MFM received in the 2013 CBAA National Awards and stated that CBAA is pleased that 2MFM is also a finalist in the 2014 CBAA awards. 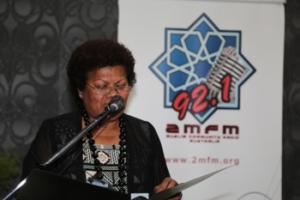 Ms. Fipe Nasome, representing the president of the national ethnic and multicultural broadcaster’s council Dr. Tangi Steen conveyed Dr Tangi’s message to the audience that applauded the work of 2MFM and encouraged the station to pursue its role of being a resilient and dedicated broadcaster.

Highlighting the importance of the theme used for this dinner, the Voice of Diversity, Ms Nasome said: “You have chosen your name very well, your job in the national level is to make sure that governments - federal, state and local recognize the voice of diversity and its prominent place in the Australian media landscape”.

The attendees also discovered the beauty and vibrancy of Malaysian culture through another eccentric performance of the Musical piece titled “The attributes of God”. 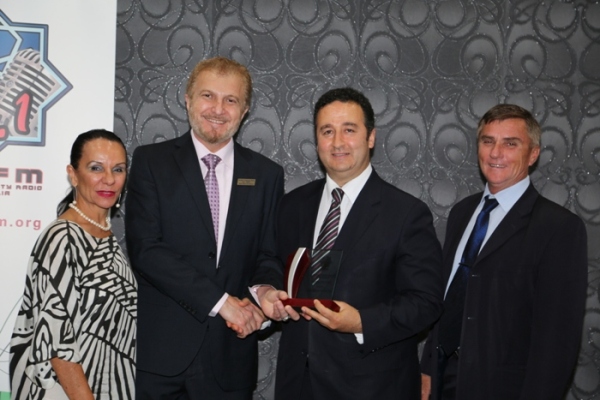 The dinner also acknowledged the success and achievements of a number of 2MFM recruits who underwent a community broadcasting training course. The group received their certificate III in Media after the completion of hands on-training with the Community Media Training Organization – CMTO.

“2MFM has consistently been praised for its effort in training and teaching programs, especially for ensuring that its staff and volunteers are equipped with the essential skills needed to satisfy the needs of the community. Congratulations on behalf of 2MFM and I hope that the knowledge our graduates have been equipped with will help you to better serve your community through 2MFM- the voice of diversity.” 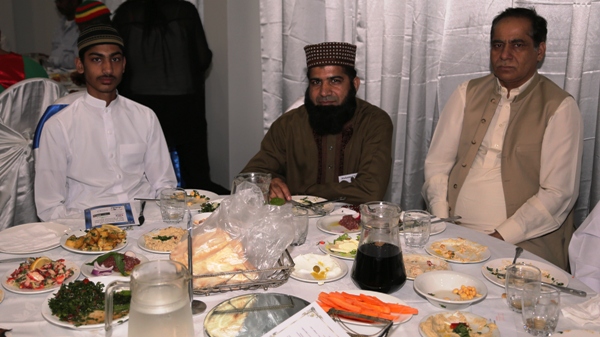 The National Training Manager at CMTO, Ms. Giordana Caputo presented her feedback regarding the training at 2MFM, and assisted the 2MFM president with the distribution of the certificates of completion to the course participants.

“As a national training organization, I would really like to acknowledge the 2MFM management and volunteers for providing a stimulating and supportive training environment.

“What personally struck me as the head trainer is each student’s commitment to personal excellence in their studies. They were dedicated, inquisitive and keen to build their skills. I was also impressed by the group as a whole and their support for one another, their dedication to the foundation of community broadcasting which is community participation; they set an amazing example for other community broadcasters to follow and to be inspired by” She said. 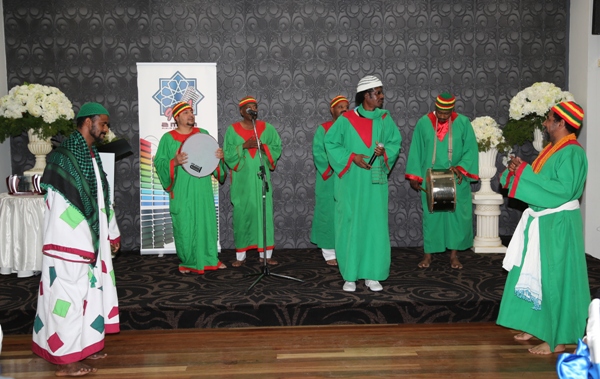 Then the exotic Sudanese chanting band offered a glimpse into the color and flavor of African culture by their vivacious traditional attire, mesmerizing tune and charismatic lyrics. The exuberant ambiance prominently arose from the interaction that invited the crowd to be a part of their performance which included drumming and traditional dancing. Almost everyone was seen recording the performance on their mobile devices, applauding and beaming with smiles and giggles.It was truly an enchanting African experience. 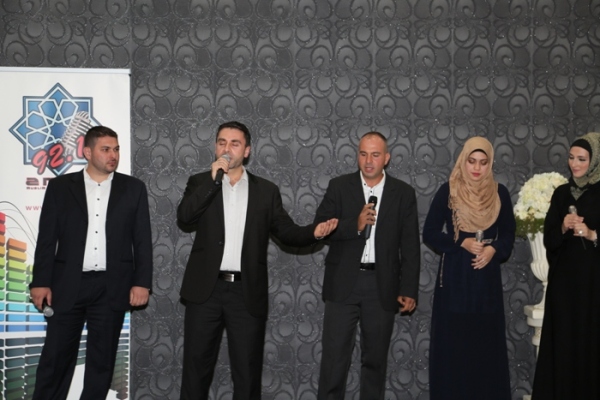 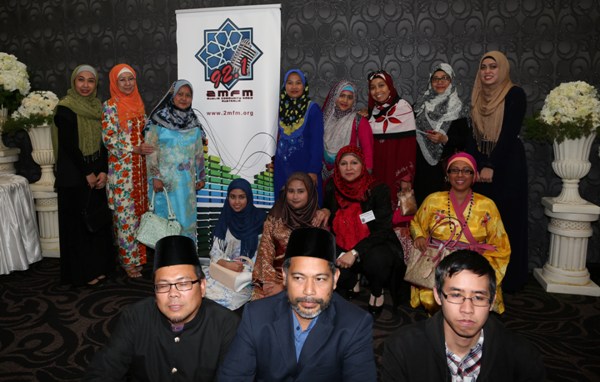 “Tonight's awards are about recognizing volunteers, organizations and sponsors who through their active participation and engagement with 2mfm are making a difference in their local community.

“These awards are an opportunity for us to showcase their inspirational work, to encourage them and others, and to commend their positive contributions to their communities through radio and support to 2MFM”. He added.

The Muslim Community Radio, alongside its management, staff and volunteers strives to continue to be recognized as the multicultural, multilingual and multi award winning voice of diversity. 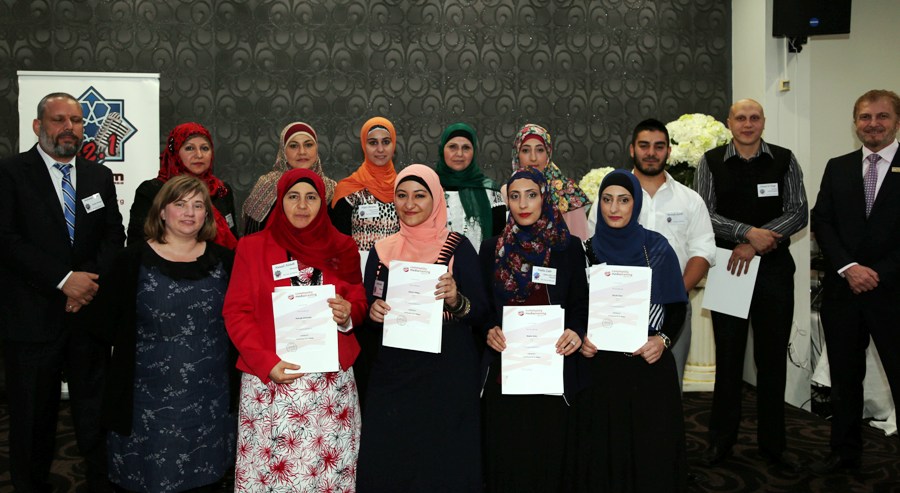