Penrith says NO to Islamophobia

Penrith, an outer suburb in Sydney’s west has rejected a racist and anti-Muslim campaign by accepting the building of a community centre in the area.
After a two hour debate Penrith Council last week voted to approve the development application by the Muhammadi Welfare Association for an Islamic Centre in Kemps Creek. The vote was split seven councillors voting for including the mayor Mr Fowler, and five councillors voting against.

The meeting was interrupted several times to calm the rowdy audience and a member of the public was ejected for calling the mayor, a liar.
Demonstrators for and against the application gathered in front of the Penrith Civic Centre before the approval meeting with a heavy police presence.
There were ugly scenes outside the building where an Asian protester was targeted with racist slurs while an African woman was told she had Ebola.
The vicious campaign against the Centre was spearheaded by far right organisation Australia First, neo-nazis and local racist elements.
However a large number of local community members in addition to Muslims demonstrated in support of the Centre with slogans “Muslims are welcome, racists are not” and outnumbered those who were against the Centre. 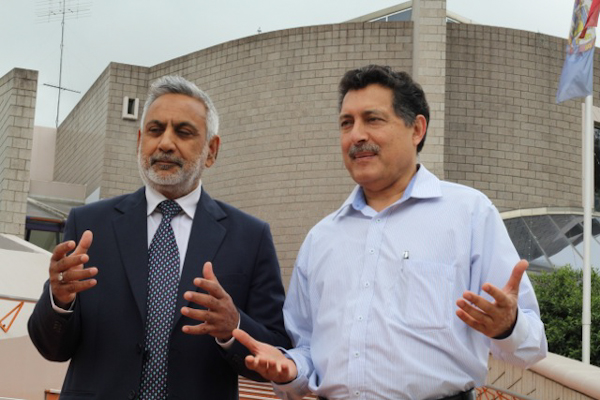 Muhammadi Welfare Association Incorporated, had applied to build a community centre and place of worship in Clifton Avenue, Kemps Creek within the greater Penrith area.

The General Secretary of the Association Mr Abbas Raza Alvi, a poet-musician and a widely respected community leader said, “ We are mainly an Urdu speaking community from the Indian subcontinent whose members now belonging to four generations who have been living in the surrounding area for more than 30 years”.

“We serve a multicultural ethnic community diaspora of Western Sydney and our members belong to professions like community services, medicine, engineering, IT, security, education, agriculture, trade and many other fields”, he said.
Mr Alvi assured that the centre will welcome all community members for interfaith dialogues, networking and appreciation of our diverse cultural background in order to promote peace and harmony in our society.

The President of the Association, Mr Athar Zaidi said he would be more than willing to talk to the protesters and tell them there was nothing to fear.
“I think people are scared of the unknown. If we have a chance to explain to them who we are, they would see that we are just normal people’, he said.
Mr Alvi announced that when the Centre was completed he would love the whole Penrith community join and celebrate its opening.

A Councillor of Penrith Council moved a Motion for the reconsideration of MWA DA approval. On Monday 8th Dec 2014, special rescission motion meeting was held at 7pm and Penrith Council approved the Construction of Kemps Creek Community Centre. On behalf of the Community, Sada e Watan would like to thank thr Mayor of Penrith and other Councillors for understanding Muslim Community requirements for Ladies & Youth.

Sketch of the proposed Islamic Centre